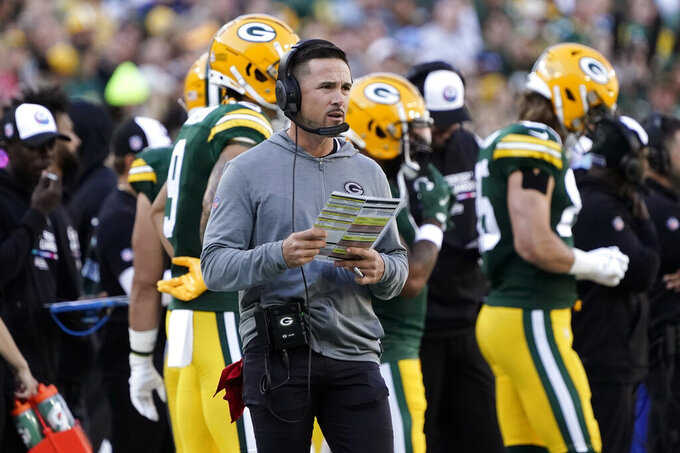 GREEN BAY, Wis. (AP) — Green Bay Packers coach Matt LaFleur insists he doesn’t have any extra incentive as he gets ready to match up against a New York Jets staff featuring both his brother and his close friend.

“To tell you the truth, I really don’t think about it for two seconds,” LaFleur said. “I really don’t. It’s about trying to prepare our team. Everybody is just the next opponent.”

“Look, he’s going against his brother and his best friend,” Rodgers said. “This game, for sure, means more to him.”

Green Bay (3-2) is seeking to bounce back after blowing a 14-point lead in a 27-22 loss to the New York Giants in London. The Packers haven't lost consecutive regular-season games within the same season since LaFleur’s arrival in 2019.

Saleh and Matt LaFleur said they never discussed the possibility of reaching this type of stage when they roomed together at Central Michigan in 2004.

“I don’t know if either one of us when we were together at Central in that small little office ever dreamed that it would be like this, so we’re very blessed, very fortunate,” Saleh said.

Perhaps the LaFleurs and Saleh are downplaying the personal nature of this matchup because they’ve faced off before, with even higher stakes.

Matt LaFleur was in his debut season as Green Bay’s coach when the Packers lost the NFC championship game to the San Francisco 49ers, whose staff featured Saleh as defensive coordinator and Mike LaFleur as passing game coordinator. Mike LaFleur says this will mark the sixth time he and his brother have faced off as opposing coaches.

This matchup is causing a change in their routines. Matt LaFleur usually talks regularly with both his brother and Saleh.

“A lot of times, we’re not even talking about football,” Mike LaFleur said. “Usually on Mondays, he critiques my play calling — ‘You should’ve done this more’ — it’s all constructive criticism. He’s just trying to help and I appreciate that.”

Not this week, though.

“I’d say on a typical week, specifically with my brother, I probably talk to him almost every day, just quickly, just check in with him and see how he’s doing,” Matt LaFleur said. “But not talking quite as much this week.”

RODGERS VS. THE AFC

The Packers have won 18 of Rodgers’ last 19 home starts against AFC teams, including 11 in a row. The streak continued with a 27-24 overtime triumph over New England two weeks ago.

Rodgers missed Wednesday’s practice with an injured right thumb but was back at practice Thursday and expects to play Sunday.

The Jets are above .500 for the first time since winning their season opener at Detroit in 2018. New York is trying to end the NFL’s longest active postseason drought at 11 years.

“I think confidence is contagious,” Saleh said. “I think our guys have deserved the right to feel good about themselves, but at the same time this league is very humbling, and it’ll take it away from you in a heartbeat.”

The Packers are playing at Lambeau Field one week after playing a game overseas. Packers safety Adrian Amos was asked how the team was handling the turnaround.

Jets rookie cornerback Ahmad “Sauce” Gardner is one of three players with at least one pass defensed in all five games this season, joining Philadelphia’s James Bradberry and San Francisco’s Charvarius Ward.

With one more on Sunday, the No. 4 overall pick would join Desmond Trufant (2013) as the only players since 2000 to deflect at least one pass in each of their first six NFL games.

The Jets have shown an ability to rally on the road.

“I know obviously a lot of familiarity with the coaching staff there, guys that I’ve got a ton of respect for, that I know are going to do a great job of coaching their guys up,” Matt LaFleur said. “And when you do that and you get talent, you’ve got a chance to be pretty good. It doesn’t happen overnight, but I think you’ve seen the strides that they’ve made in a short period of time. It’s been pretty impressive.”