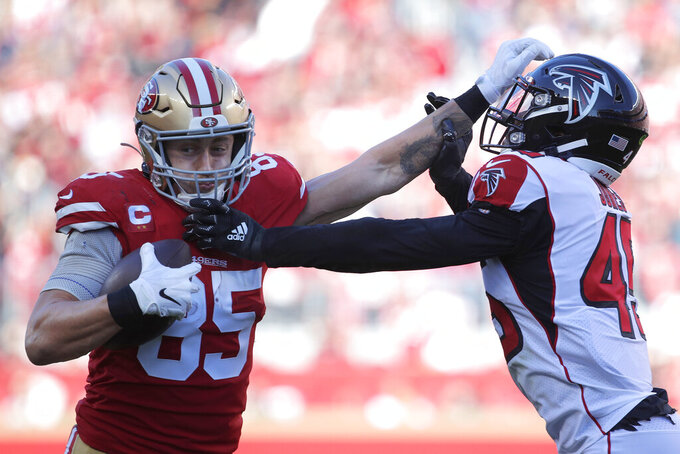 SANTA CLARA, Calif. (AP) — Quarterback Jimmy Garoppolo and the San Francisco 49ers surely didn't want to clinch their playoff spot in this fashion. They lost their margin for error chasing the No. 1 seed with a fourth-quarter flop against the lowly Atlanta Falcons.

It stung a little more for a subdued 49ers coach Kyle Shanahan, watching his former team celebrate a dramatic, final-second 29-22 win on the 49ers' home field.

Still, San Francisco is back in the postseason for the first time since losing the NFC championship game at Seattle after the 2013 season. While the Niners could have secured their place with a victory, they instead relied on the Rams' loss at Dallas to get it.

They must now win out to earn the NFC's top seed — with a season-ending road game against the Seahawks on Dec. 29 still on the schedule. That comes after a shorter week with the Rams visiting the Bay Area on Saturday night.

“Yes it is weird,” veteran left tackle Joe Staley said. “I don’t even feel good. We want to clinch by winning. I think the main thing is we have two games left in the season and we take care of business, and we play how we know we are capable of playing in this locker room. I think we will look back and this is a huge learning experience from the season, and we will carry that forward to the playoffs.”

The ending was wacky, and tough for the Niners to comprehend following a 48-46 win a week earlier at New Orleans.

Fill-in safety Marcell Harris broke up a pass in the end zone intended for Austin Hooper in the waning moments Sunday. Then with 8 seconds remaining, Hooper couldn't secure a catch in the end zone though the Falcons were already celebrating an upset when the play went to review and the catch was overturned because the ball hit the ground.

That was just the first reversed call on replay in the closing seconds.

Matt Ryan's winning 5-yard touchdown pass to Julio Jones with 2 seconds left came after a replay reversal. Jones initially was called short of the goal line with the Falcons trailing 22-17. But a replay showed the ball breaking the plane with the Atlanta wideout in the air while being tackled by Jimmie Ward.

Garoppolo and the offense never got in a good rhythm.

A week after piling up 48 points, the 49ers' offense fizzled for most of the game. Garoppolo finished 22 for 34 for 200 yards and had 13 completions to George Kittle for 134 yards. Garoppolo's streak with a passer rating of at least 110 ended at four straight games when he finished at 90.3. The only San Francisco QB to do that previously was Steve Young with six-game streak in 1994.

Garoppolo, for one, is happy to have a quick turnaround and a new opponent to prepare for immediately with Los Angeles, saying: “Having a short week this week will be good for us. Kind of turn the page and move on.”

Much as Shanahan and Ryan did during a special Super Bowl run that fell short to New England during Ryan's MVP season of 2016, Garoppolo and his young coach are counting on a deep postseason together.

This failure very well could be forgotten or considered just a minor blip.

“We’re not looking for encouragement. We have a pretty good record. We feel good about where we’re at,” Shanahan said. “It’s cool that we’re in the playoffs, because that was our goal. Now that we’re in it, we want the best situation possible in that tournament. All we can do is win these next two games. When you get to this point in the year with where we’re at and what we’ve done, we’re encouraged by one thing right now, and that’s winning. That’s how it’s going to be the rest of the year.”