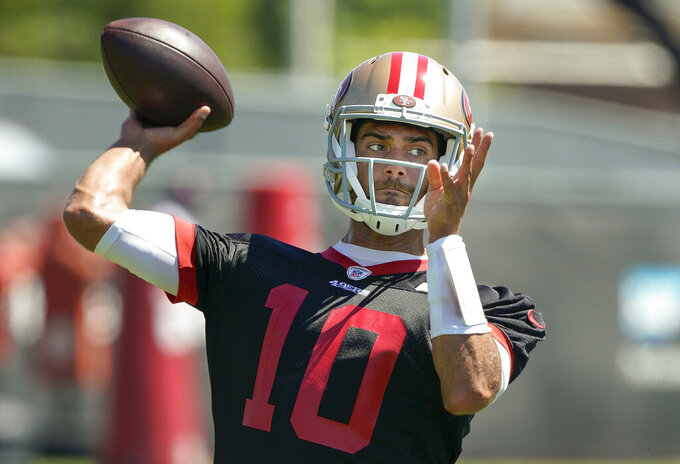 FILE - In this June 10, 2019, file photo, San Francisco 49ers quarterback Jimmy Garoppolo throws a pass during a drill at the team's NFL football training facility in Santa Clara, Calif. Garoppolo is going to summer school before starting training camp with the 49ers. Garoppolo is spending part of his down time between the end of minicamp and the starting of training camp on July 27 working in Southern California with quarterback guru Tom House. (AP Photo/Tony Avelar, File)

Garoppolo is spending part of his down time between the end of minicamp and the start of training camp on July 27 working in Southern California with quarterback guru Tom House.

House is a former major league pitcher and pitching coach perhaps most famous for catching Hank Aaron's record-breaking 715th career homer in the Atlanta Braves bullpen in 1974. But in recent years, House has run a quarterback academy in Huntington Beach called 3DQB where he helps passers refine their throwing mechanics.

House has worked with several star quarterbacks over the years, including Tom Brady, Drew Brees, Matt Ryan and Carson Palmer. Garoppolo met House during his time in New England as Brady's teammate on the Patriots and has been spending time working on his mechanics all offseason as he comes back from season-ending knee surgery.

"We're trying to implement drills as close to game-like situations as you could get to," Garoppolo said in a phone interview last week.

"At the same time, we're sticking to mechanics and the basics. That's what quarterbacking comes down to. You have to be really good with the basics and do them over and over again. It's good to get someone with as much experience as Tom.

"It's nice to have him see you throw and see if he has any little things to fix up or anything you haven't thought about that he thinks can help you. Quarterback is a very unique position and a lot goes into it. There are a lot of moving pieces."

The extra work this offseason is important for Garoppolo, who played just three games all last season before tearing his ACL and has just 10 career starts in five NFL seasons.

Garoppolo showed plenty of promise after arriving in San Francisco in a trade with the Patriots midway through the 2017 season. He stepped in after a few weeks and won all five starts, earning a five-year, $137.5 million contract to stay off the free-agent market.

Now the Niners hope he can regain his form from 2017 with help from an overhauled group of receivers, including second-round receiver Deebo Samuel, third-rounder Jalen Hurd and veteran Jordan Matthews.

San Francisco also signed running back Tevin Coleman and will have a healthy Jerick McKinnon after last year's big free-agent acquisition missed all of 2018 with a major knee injury.

Some of those players are spending time with Garoppolo this summer and he plans to get a big group together in Santa Clara before the start of training camp in order to build up a rapport as quickly as possible.

"I'm trying to pick up their mannerisms, what motivates them, all those things," Garoppolo said. "There's a million different things that go into it. It's exciting. This time of year, with only a couple of weeks until training camp, it's grind time.

"Chemistry comes with experience and practice reps. A guy can be last on the totem pole but if he starts making plays day after day he can move up quickly. That's kind of the nature of the beast when it comes to football. But that's the exciting part of it."

When he's not working on football this offseason, Garoppolo has also been spending time on community service. He's teamed up with Men's Wearhouse as part of a Suit Drive this month, where the clothing store distributes gently used professional attire to people looking to re-enter the workplace through job readiness programs.

Men's Wearhouse has collected more than 2 million items of clothing for men and women over 11 years of the program.

"I thought it was just a cool opportunity," Garoppolo said. "I always try to find ways that somehow relate to football. The Suit Drive puts people in a successful situation and helps them look good for the opportunity they get. It's similar to football in the respect that it's kind of that 'feel good, play good mentality.' You want to make a good first impression. That's how the whole thing got started."