Garoppolo not ruled out despite not being able to practice 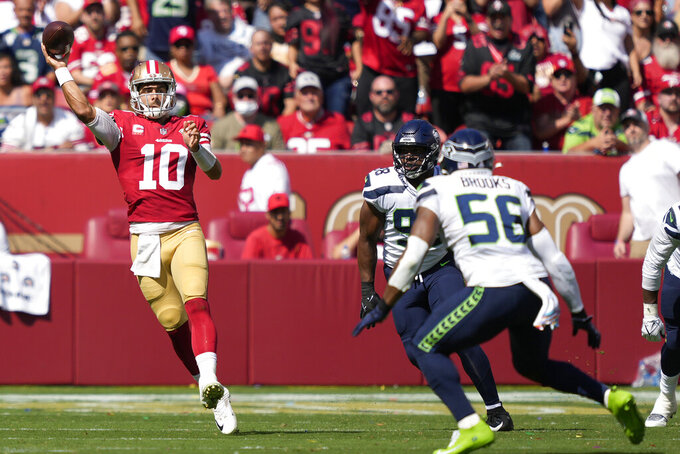 SANTA CLARA, Calif. (AP) — Quarterback Jimmy Garoppolo's injured calf hasn't healed enough for him to be able to practice but isn't injured enough to rule him out of this week's game for the San Francisco 49ers.

The Niners began their practice week before a division showdown Sunday against Arizona with uncertainty about whether Garoppolo would be available after leaving last week's game at halftime with an injured right calf.

“It’s better today, which is good news,” coach Kyle Shanahan said. "Not enough, though, to let him go. But also, not enough to rule him out. The doctors still say give him another day, he’s got a chance. So, I’m still holding out for that.”

Rookie Trey Lance got the work with the starters on Wednesday with practice-squad player Nate Sudfeld the other healthy quarterback.

Shanahan said the Niners are waiting for the swelling in the calf to go down more to determine whether the calf will be healthy enough for Garoppolo to push off on throws and be able to play.

There has been some improvement since Sunday when a dejected Garoppolo speculated he'd likely miss a couple of weeks.

Garoppolo is holding out hope that he will be able to play against the Cardinals even if he acknowledged he still has pain and likely won't be fully healed.

“Battling through it probably,” he said about the best-case scenario if he could play. “We’ll take it day by day, but it hurts.”

Garoppolo's history of injuries that include an injured shoulder in 2016, a blown-out knee in 2018 and a high ankle sprain that limited him to six starts last year contributed to San Francisco's decision to trade three first-round draft picks to take Lance third overall.

Lance got only spot duty the first three weeks with seven offensive snaps in a situational role but did have a TD pass and a TD run.

He struggled with his accuracy during his long run of play in last Sunday's 28-21 loss to Seattle but took advantage of a blown coverage to connect on a 76-yard TD pass to Deebo Samuel and led a late TD drive capped by another touchdown pass to Samuel.

“I thought when he got thrown into battle here, just running the offense and not really his specific plays, I thought he got more comfortable as the game went,” Shanahan said. “Especially going home and watching the tape after the game, I thought there was a lot of encouraging stuff.”

Shanahan said it was a bit of a challenge designing a game plan not knowing if the quarterback would be a traditional drop-back style player like Garoppolo of the more mobile Lance, who can be a big part of the running game.

Lance also offers the ability to make off-schedule plays when things break down, but Shanahan said you don't want to rely on that style of “backyard ball.”