Garrett "looked good" in return from COVID, set for Titans 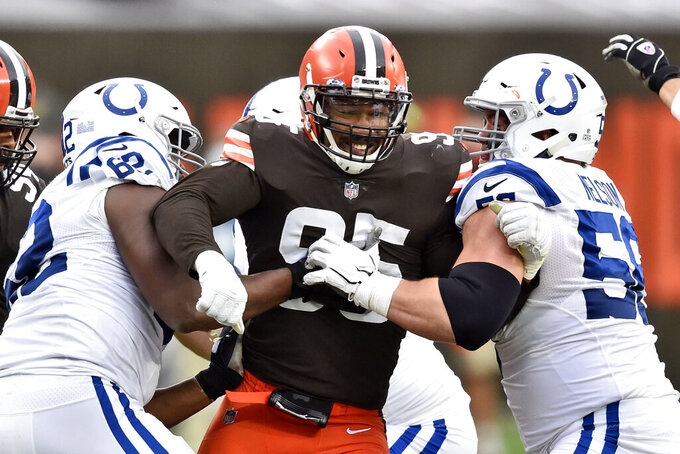 FILE - Cleveland Browns defensive end Myles Garrett (95) rushes the passer during the first half of an NFL football game against the Indianapolis Colts in Cleveland, in this Sunday, Oct. 11, 2020, file photo. Browns defensive star Myles Garrett was activated from the COVID-19 list after missing two games, clearing the end and sack specialist to return this week against Tennessee. (AP Photo/David Richard, File)

Cleveland's defensive star was welcomed back with open arms by the Browns this week after he missed two games with COVID-19.

Garrett practiced Wednesday for the first time since he became infected with the virus, and defensive coordinator Joe Woods even hinted that he might have bent the intensive coronavirus protocols by hugging his best player.

“Maybe,” Woods said Thursday with a laugh. “It's definitely good to have him back. It was good to see his face out on the field and he looks good.”

Garrett had been sidelined since testing positive for the virus on Nov. 20. He sat out wins over Philadelphia and Jacksonville, but the Browns (8-3) are excited to have back one of the NFL's top defenders, who was leading the league in sacks when he got sick.

Before Thursday's workout, Browns coach Kevin Stefanski said Garrett was able to make it through Wednesday's session as the team practiced in advance of this week's matchup against the Tennessee Titans (8-3).

“He was out there yesterday and looked good to me," Stefanski said. "We are going to make sure that we are smart about how we get him back out there. Checking in with him yesterday, he looked really good and then see how he looks today and just keep an open dialogue with him.”

The Browns coaching and training staffs will closely monitor Garrett over the next two days. By Saturday, they'll have a better idea of how much he'll be able to play.

“He feels good,” Woods said. "I just think it's the process of bringing him back the right way, so we'll monitor his reps each day in practice and see where he's at. But we do know that he'll be available to play. We'll just have to see how many reps we can give him."

The Browns will need Garrett as close to full strength as he can be as they take on Titans running back Derrick Henry, the league's reigning rushing champion who has 1,257 yards this season.