Gase insists 'fracturing is not an option' for winless Jets 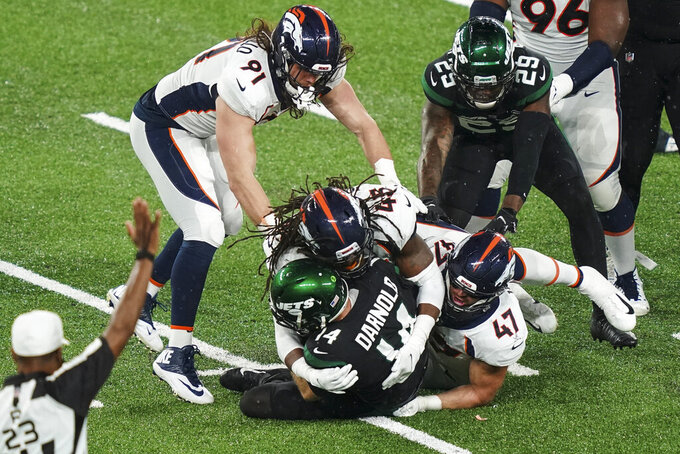 NEW YORK (AP) — Adam Gase is staying put for now. All of the lowly New York Jets' struggles appear to be sticking around, too.

A second consecutive 0-4 start — a dubious first in franchise history — has frustrated fans clamoring for changes, starting with the coach. But Gase is still in charge and trying to turn things around in a season that is already spiraling.

“Our guys, they have to do a good job of sticking together and blocking out any outside noise and getting better every day in practice,” Gase said Friday. “I talked to all those guys today about fracturing is not an option.”

It would be easy to point fingers — but you might run out of hands.

Some might blame the rash of injuries. Or, the ineptitude of the offense. And the porous defense. Also, the mental mistakes and the game-changing penalties.

You get the picture. The Jets are a seriously flawed squad, and it's already time to start wondering if a win is anywhere on the schedule.

“We’re four games in,” Gase said. "We’ve got to do a good job of putting our head down, going to work, correcting the mistakes, fixing the stuff that’s absolutely non-talent based and doing those things right first, and then your outcome is going to be different.

“But we’ve got to fix the things — the controllable stuff, for sure, the non-talent things — we have to get those fixed immediately, and then we’ll see where that takes us.”

The Jets also need some clarity on the short- and long-term health of quarterback Sam Darnold's sprained right shoulder.

Gase said the team is uncertain of Darnold's status for practice or New York's next game at home on Oct. 11 against Arizona after the quarterback was slammed to the MetLife Stadium turf by Denver's Alexander Johnson. It initially appeared serious, but Darnold was able to return and finish the 37-28 loss on Thursday night.

“We just need to make sure that we lay everything out and kind of see where we go from here and what’s best for him,” Gase said.

So, yes, an already rough season could become even more unbearable. For the Jets — and their fans.

Darnold's legs. One of the few bright spots in the loss was the quarterback's dazzling touchdown run that gave the Jets their first lead in any game this season. With his 46-yard scramble, Darnold joined Houston's Deshaun Watson and Baltimore's Lamar Jackson as the only quarterback in the last five seasons with a TD run of 40 or more yards. It also caught the attention of athletes in other sports.

“Helluva run by Darnold!” Los Angeles Lakers star LeBron James tweeted. “The juke move once he got out the pocket was a RB elite move.”

Darnold finished with 84 yards rushing, breaking the franchise mark for QBs set by Al Dorow with 72 at Buffalo in 1960. The 46-yard TD was the longest by any Jets quarterback.

Team discipline. The Jets were called for 13 penalties against the Broncos with 11 accepted, including a whopping six personal fouls, totaling 118 yards. Eight of the 11 penalties — including all six personals — were on the defense. For the season, New York has seven roughing-the-passer penalties.

“We've got to be smart,” safety Marcus Maye said. “Penalties after the whistle aren't necessary. We've just got to find a way to cut it out because it's hurting us.”

Jeff Smith. The wide receiver, in his second season with the Jets, was activated from injured reserve earlier in the day and tied Jamison Crowder for the team lead with seven catches and finished with 81 yards in his season debut. A converted quarterback with speed showed instant chemistry with Darnold.

Gregg Williams. The defensive coordinator has had a rough year, with his unit playing undisciplined and unable to consistently stop offenses. The Jets allowed the Broncos to rack up 359 yards and let third-stringer Brett Rypien move the ball up and down the field for most of the game.

LT Mekhi Becton has no structural damage to his injured left shoulder. He didn’t start as Chuma Edoga took his spot in the lineup. But Edoga injured his shoulder on the Jets’ fourth offensive play and Becton needed to replace him before he also left. ... CB Bless Austin and LB Jordan Jenkins are day to day with calf injuries. ... RT George Fant has an injured thumb and will need to play with a cast. ... Rookie WR Lawrence Cager (hamstring) will likely be sidelined a few weeks.

2 for 9. That's the Jets' red-zone efficiency this season, scoring touchdowns just twice inside the opponents' 20-yard line. New York went 0 for 3 against Denver. Sam Ficken had a big game with five field goals, but that's also indicative of the team's red-zone problems.

The Jets have a long week to flush away their latest loss and prepare to host Kyler Murray and the Cardinals. They'll be looking to avoid their first 0-5 start since 1996 — the squad that went 1-15 under Rich Kotite.