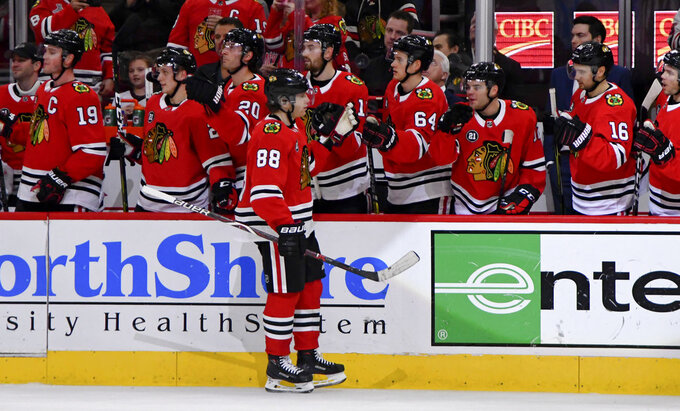 Chicago Blackhawks right wing Patrick Kane (88) celebrates with teammates after his goal against the Calgary Flames during the first period of an NHL hockey game on Monday Jan. 7, 2019, in Chicago. (AP Photo/Matt Marton) 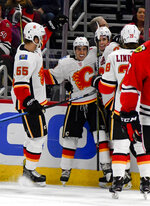 CHICAGO (AP) — Johnny Gaudreau had a blast during Calgary's short stay in Chicago.

The 25-year-old Gaudreau extended his goal-scoring streak to five games one night after the New Jersey native watched his beloved Philadelphia Eagles beat the Chicago Bears 16-15 in the first round of the NFL playoffs.

Sean Monahan had a goal and an assist as Western Conference-leading Calgary closed out a 3-1 trip with its second straight win. Garnet Hathaway scored an empty-net goal with 50 seconds left, and Elias Lindholm finished with two assists.

It was the 15th road win for the Flames, matching Tampa Bay for most in the NHL.

Patrick Kane had a goal and an assist for the Blackhawks in the opener of a three-game homestand. Alex DeBrincat and Brandon Saad also scored, and Collin Delia made 39 stops.

"They took it to us in the third period," Kane said. "We were in a good spot after two, tied up. We should be confident in that position. It was unfortunate they got an early goal and we got away from our game plan after that."

Kane picked up right where he left off after he collected three assists in Sunday night's 5-3 victory at Pittsburgh. The dynamic forward scored his 24th goal in the first period on a backhand from an impossible angle on the right side of the net, and then set up DeBrincat's 20th goal with a well-placed pass in the second.

Monahan tied it at 2 with a power-play goal with 1:18 left in the second, finishing a pretty passing sequence. The Flames then caught the Blackhawks in a bad line change early in the third, and Gaudreau squeezed one between Delia's pads for his 26th of the season.

"I was trying to get a quick shot through the five-hole there and it kind of squeaked in there," Gaudreau said. "Guys gave me a hard time on the bench when I got back there saying "about time." But it was a big goal."

Gaudreau, who also scored in the first, has 14 goals and 11 assists in his last 13 games.

After Hathaway made it 4-2 with his fifth of the season, Saad got one back for Chicago with 29 seconds remaining. But Calgary held on from there.

"If we play close to three periods like the way we play the second, then we win the game," Blackhawks coach Jeremy Colliton said. "And we didn't do it."

NOTES: D Henri Jokiharju rejoined the Blackhawks after helping Finland win its fifth world junior hockey title. "You feel it more right now, a couple days after. It's a huge thing for Finland," he said. The 19-year-old Jokiharju got the night off against the Flames. ... It was career goal No. 161 for Monahan, matching Jim Peplinski for 11th on the franchise list. ... Former Blackhawks F Dennis Hull joined the starters on the ice for the national anthems. The 74-year-old Hull, who had 298 goals and 342 assists in 13 seasons with Chicago, was honored as part of the team's "One More Shift" program.

Flames: Host the Colorado Avalanche on Wednesday night for the opener of a five-game homestand.