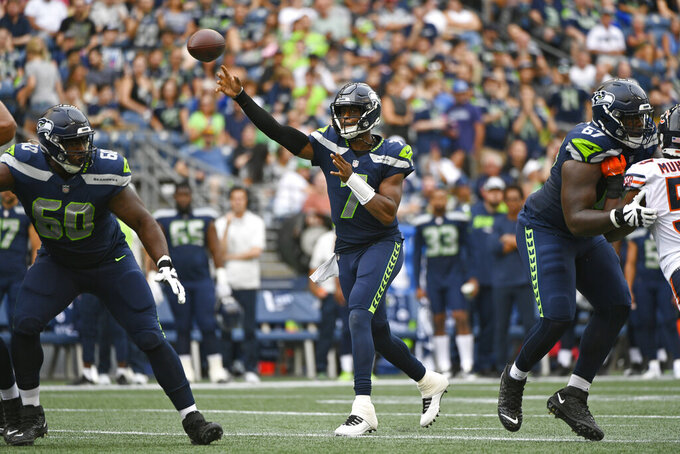 SEATTLE (AP) — When Geno Smith was last a full-time starter to begin a season in the NFL, he was just a kid in relative terms.

A lot older and hopefully wiser, Smith’s chance at again being a starter begins Monday night when the Seahawks host the Denver Broncos. It will be eight years since the previous time he was a starting quarterback on the opening weekend of the regular season.

And depending on how this season goes, it could be Smith’s last chance to be in that role.

“He’s had all the prep. He’s ready to roll,” Seattle coach Pete Carroll said. “I would say this is the best Geno has ever been and the best command he’s ever had. It gives him a really good chance to be a great asset for us.”

Most of the quarterback attention on Monday night will be on the other side of the field and rightfully so. After a decade in Seattle that included two NFC titles and the only Super Bowl championship in franchise history, Russell Wilson will make his debut with Denver against the team that gave him an NFL opportunity as a third-round pick in 2012.

His return to Seattle was always going to be a primetime showcase, and seemingly a perfect cap to Week 1.

“I do understand everything that is going on around us. Russell was the man here for a while and I know there will be emotions on both sides, but I’m not caught up in that. I’m just focused on taking care of business,” Smith said.

Smith beat out Drew Lock for the starting job, although Smith was always in the lead and never fell behind. The week of camp when it appeared Lock would have a chance to make significant gains to at least pull even with Smith, he became sick with COVID-19 and gone was his chance to bypass Smith in the competition to at least begin the season.

The previous time Smith entered a season as the starting quarterback was 2014. He was beginning his second season with the New York Jets and after leading them to an 8-8 record in his rookie season.

The Jets finished that season 4-12 and went 3-10 in the games that Smith started. By the time 2015 started, Smith was better known for being punched and suffering a broken jaw at the hands of a teammate in a locker room disagreement.

In the time since, Smith slid into the role of backup wherever he went. Between 2015 and 2020, Smith started one game and that was embroiled in controversy when he got the nod in place of Eli Manning with the New York Giants in 2017 and snapped Manning’s streak of 210 consecutive starts.

But he also tried to learn in those situations, whether it was serving as Manning’s backup, backing up Philip Rivers with the Chargers or his time working with Wilson in Seattle.

“Being in the room with those guys and just learning football, being in different football systems, being around different coordinators, I was able to gain a ton of knowledge,” Smith said.

And while they’ll be opponents, Wilson is thrilled for Smith to get his chance.

“I never held back and to give him everything I knew and vice versa, and that’s what it’s about. It’s just trying to share what you know, and what you love, and it’s been an amazing joy,” Wilson said. “I’m excited to see him. I think he’s going to have a great year. He’s a great guy, a great competitor.”

It was Wilson’s finger injury last season that opened the door for Smith to get back on the field. When the decision was made to trade Wilson to the Broncos, the Seahawks at least had enough background information having seen Smith in games that he could fit what they wanted in having a facilitator at quarterback rather than the QB being the center of the offense.

That doesn’t mean it’s Smith’s job in perpetuity. Struggles could open the door for Lock to take over at some point this season and there’s an underlying expectation that the 2023 draft is where Seattle will try to find its next franchise QB.

“It’s extremely exciting. I know everyone here is excited and personally for me, I don’t feel any type of vindication or anything like that,” Smith said. “It’s more so just preparing and doing the same thing I’ve always done; not making it more than what it is.”