Geno Smith's time arrives as he steps up for Seahawks 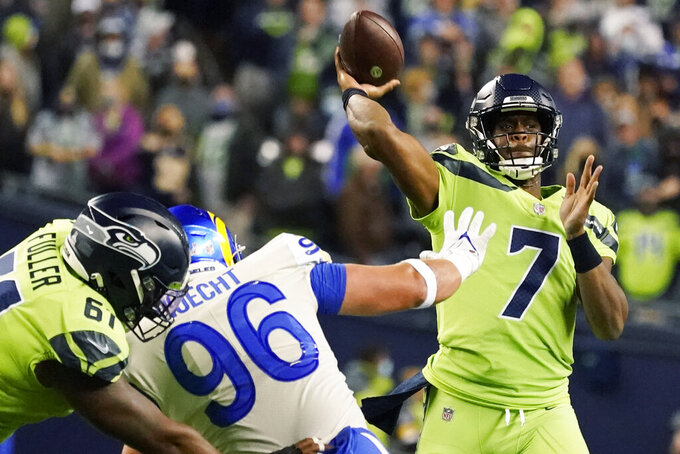 Seattle Seahawks backup quarterback Geno Smith (7) passes to wide receiver DK Metcalf for a touchdown against the Los Angeles Rams during the second half of an NFL football game, Thursday, Oct. 7, 2021, in Seattle. (AP Photo/Elaine Thompson)

RENTON, Wash. (AP) — Geno Smith last started an NFL game four years ago, but what he’s learned along the way as a backup in two previous spots before landing with the Seattle Seahawks has taught him plenty as he’s bided his time waiting for another opportunity.

“Knowing I have a capability to play in this league but I’m just not getting that opportunity for a number of years was a test of patience,” Smith said. “And that also goes for me playing quarterback on the field. When I was younger, coming from college we put up so many points. I was just so used to scoring every time and so that was my mentality. But the NFL, man, you ain’t going to score every time.”

Smith will make his first start since Dec. 3, 2017, on Sunday night when the Seahawks face the Pittsburgh Steelers. Smith entered in the fourth quarter last week against the Los Angeles Rams and flourished in trying to lead a late rally, nearly pulling off a magical comeback before an interception after a receiver stumbled thwarted the storybook potential of the moment.

Still, it was a significant 15 minutes of game time for Smith, proving to those who had only seen him play in the preseason during his time with the Seahawks that he can deliver when pressed into action.

Smith is far removed from the 23-year-old who was thrown into the starting job with the New York Jets as a rookie eight years ago. In two seasons as the Jets starter, Smith was 11-18 with 25 touchdowns, 34 interceptions and plenty of criticism.

In the six-plus seasons since he lost his starting job with the Jets, Smith has started a total of two games. One game in 2016 with the Jets. The other in 2017 with the New York Giants, when Eli Manning was benched, ending his lengthy streak of consecutive starts.

When Smith takes the field Sunday, he’ll bring to an end Wilson’s streak of 165 consecutive starts — regular season and playoffs combined — that began with the first game of his rookie season. The last quarterback not named Wilson to start a game for Seattle was Tarvaris Jackson on Jan. 1, 2012.

“Any time you get adversity, it’s a chance for you to show what you are really about and to respond,” Smith said. “At the time, looking back on it, in that moment was I totally aware of that? Probably not. But as you go on, you just grow and see how those things can help and shape you to get better. I think that’s what it did.”

When Smith signed with Seattle before the 2019 season, he knew he was getting into a situation where playing opportunities would be limited. But he also saw it as a chance to learn after stops playing behind Manning with the Giants and Philip Rivers with the Chargers.

His standing in the locker room and comfort serving as Wilson’s backup kept Smith from leaving when opportunities presented themselves in the past. The Seahawks are hoping that pays off while Wilson is sidelined.

“When you do get your opportunity that’s what you’ve been waiting for, so you want to go out there and make it happen,” wide receiver Tyler Lockett said. “You want to be able to prove to yourself, not just everybody else, you want to prove to yourself that you can still play. You still belong here. You’re still as great as what everybody saw when you were growing up, when you were out there in Morgantown balling in the Big 12 all the way to when you got to the league. We believe that Geno can get it done.”

NOTES: TE Gerald Everett spoke for the first time since being activated off the reserve/COVID-19 list. Everett said after the Seahawks returned from their Week 3 game in Minnesota that he felt like a small cold was coming on and tested positive on Sept. 29. Everett missed the Week 4 and 5 games after he couldn’t get cleared in time to play against the Rams. “I thought I would be the last one in the league to get COVID. I don’t even know where I contracted the virus,” Everett said. He is expected to play this week at Pittsburgh.