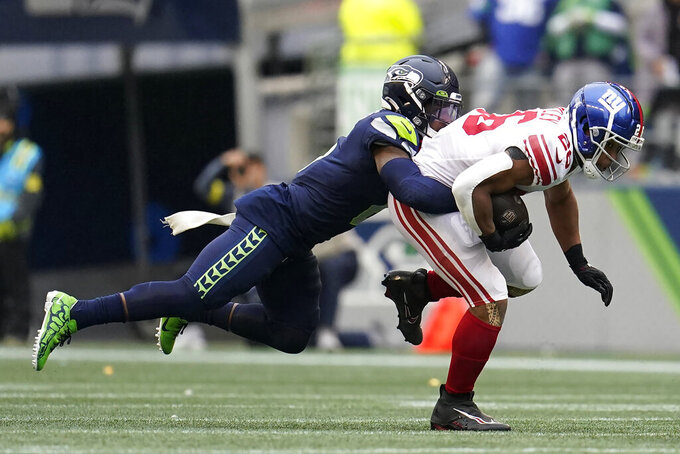 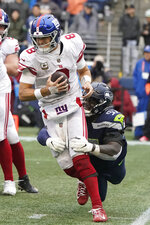 SEATTLE (AP) — After weeks of riding the edge with one close win after another, the New York Giants finally ran into a combination of obstacles they couldn't overcome.

Injuries, critical turnovers and an opponent loaded up to stop Saquon Barkley sent the Giants into their bye week with a 27-13 loss to the Seattle Seahawks on Sunday.

The Giants are still 6-2 heading into a needed week off for a team that was breaking in two new starters on the offensive line against the Seahawks. And the absences of injured right tackle Evan Neal and left guard Ben Bredeson showed.

Barkley was stymied, held to a season-low 59 yards rushing on 20 carries by a Seattle defense that less than a month ago gave up 235 yards on the ground to New Orleans. Quarterback Daniel Jones was hit hard and flustered, and was unable to add the element of his running to the Giants offense.

Throw in two fumbled punt returns by Richie James that led to points for the Seahawks, and New York couldn't keep its four-game winning streak going.

“We just didn’t do enough today all the way around,” coach Brian Daboll said. “Again, give Seattle credit. It’s hard, the ball is important. We have to do a better job of taking care of it and executing and finishing drives, converting on some third downs, particularly early on in the game. A lot to work on.”

Seattle’s ability to shut down Barkley highlighted the thin edge the Giants ride offensively. Their lone touchdown on Sunday came on a 2-yard drive after Seattle’s Tyler Lockett fumbled deep in his own end.

The Giants went three-and-out on four of their six possessions in the first half. They didn’t get a first down until the second quarter and had a season-low 14 for the game, five of them coming on one drive to start the second half.

It was just the second time in Barkley’s career he carried the ball 20 times and averaged less than 3 yards per attempt. And with Barkley contained, Seattle was able to mostly shut down the Giants through the air. Jones had just 17 yards passing in the first half, and his longest completion was 27 yards to Tanner Hudson. New York had five plays total of longer than 15 yards.

“I think that’s part of playing at this level, playing in the NFL — that defenses are good, teams are good,” Jones said. “Seattle deserves a lot of credit. They are a good defense and a good team. They played better than us today. We’ll look to see how we can clean up some things and improve but that’s the way it works in this league.”

A week after Jones was able to add his running to the Giants offense, he was limited to 20 yards on six carries as Seattle did an excellent job of keeping him in the pocket. Seattle coach Pete Carroll said the containment by the outside linebackers was critical against both Jones and Barkley.

“The guys on the edge did a great job. The outside backers did a fantastic job today keeping that from popping and getting out,” Carroll said.

New York is optimistic about where it will stand coming out of the bye, especially with a schedule that features four of the next five games at home, the next two against Houston (1-5-1) and Detroit (1-6).

“I think we have done some things well, found a way to win some games,” Jones said. “But like we’ve said, there’s a lot still out there for us. I think today shows that a little bit. There’s a lot we need to improve on and shore up if we want to continue to be the team that we think we can be.”