Giants' Daniel Jones showing signs of being a No. 1 QB 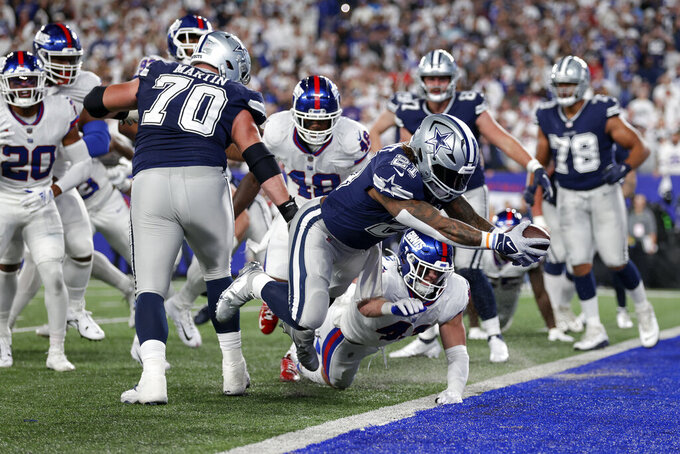 Dallas Cowboys running back Ezekiel Elliott (21) leaps across the goal line for a touchdown against the New York Giants during the third quarter of an NFL football game, Monday, Sept. 26, 2022, in East Rutherford, N.J. (AP Photo/Adam Hunger)

EAST RUTHERFORD, N.J. (AP) — One of the biggest jobs Brian Daboll has faced in his first season as the New York Giants coach has been evaluating Daniel Jones at quarterback.

The No. 6 overall pick in 2019, Jones was inconsistent in his first three seasons and his play wasn't the type needed to be a franchise quarterback.

It's why the Giants didn't pick up the fifth-year option on his rookie contract earlier this year.

It was also an ultimatum of sorts. Play better or forget about being back in 2023.

Three games into the season, nothing is settled.

The Giants (2-1) lost for the first time under Daboll, dropping a 23-16 decision to the NFC East rival Dallas Cowboys (2-1) on Monday night.

While it was a setback, Jones was solid in a game where the Cowboys put him under intense pressure, sacking him five times and hitting him 12 times overall.

Despite it all, Jones protected the ball and had one of his better games. He hit 20 of 37 passes for 196 yards and ran nine times for 79 yards. His only turnover came on New York's final offensive play. He was intercepted by Trevon Diggs on a play where receiver David Sills slipped and fell as Jones threw the ball.

Daboll feels Jones has taken steps every game despite being sacked 13 times overall. In fact, he said seeing a quarterback under pressure helps in making an evaluation.

“He was under some duress. He escaped. He made some loose plays,” Daboll said Tuesday. “He did some things with his feet. He made some good throws. He competed his tail off.”

In other words, Jones gave the Giants a chance to win, which is what any team wants from its quarterback.

The next step for Jones will be consistency and it starts next week against the Chicago Bears in the finale of New York's early three-game homestand.

Saquon Barkley continues his comeback season. He rushed for a team-high 81 yards on 14 carries and scored on a weaving 36-yard run that gave the Giants a 13-6 lead in the third quarter. New York finished with 167 yards rushing on 25 carries, with Jones averaging 8.8 yards on his nine runs.

The receiving group is desperate with Sterling Shepard out for the season with a left ACL injury and rookie Wan'Dale Robinson and second-year wide out Kadarius Toney (hamstring) uncertain.

Robinson missed his second straight game with a knee injury, while Toney was inactive with a hamstring injury. That leaves Richie James, David Sills, Kenny Golladay and Darius Slayton to handle things.

Daboll said the Giants will get by with their current group although general manager Joe Schoen may have to look around to see who is available to sign.

Leonard Williams. The defensive lineman didn't play because of a knee injury, and his stock shot way up in missing the first game of his eight-year career. Without him, the Giants defensive front was shredded by the Cowboys, who rushed for 176 yards on 30 carries, a 5.9 yard average.

Evan Neal. It could just as well have been the entire offensive line. Neal, the No. 7 pick overall in the draft, gets the nod for being schooled three times by the Cowboys defensive end DeMarcus Lawrence on sacks. Neal just looked slow on Lawrence's speed rushes and needs to improve his footwork.

Shepard may have played his final game for the Giants. The 29-year-old tore an ACL in his left knee on New York's final offensive play. It was a non-contact injury. He is in the final year of his contract and might not be re-signed after a second major injury in less than a year. He tore an Achilles tendon late last season.

14 — The number of tackles safety Julian Love had to make. It shows the Cowboys were hitting passes and having their runners get to the second level of the defense.

This is a short week and the Giants don't have a lot of time to bounce back from their first loss under Daboll. The players have done a good job of focusing, but the Bears (2-1) can't be overlooked. They beat the San Francisco 49ers to open the season and their only loss was to the Green Bay Packers. The Giants can't afford a letdown.