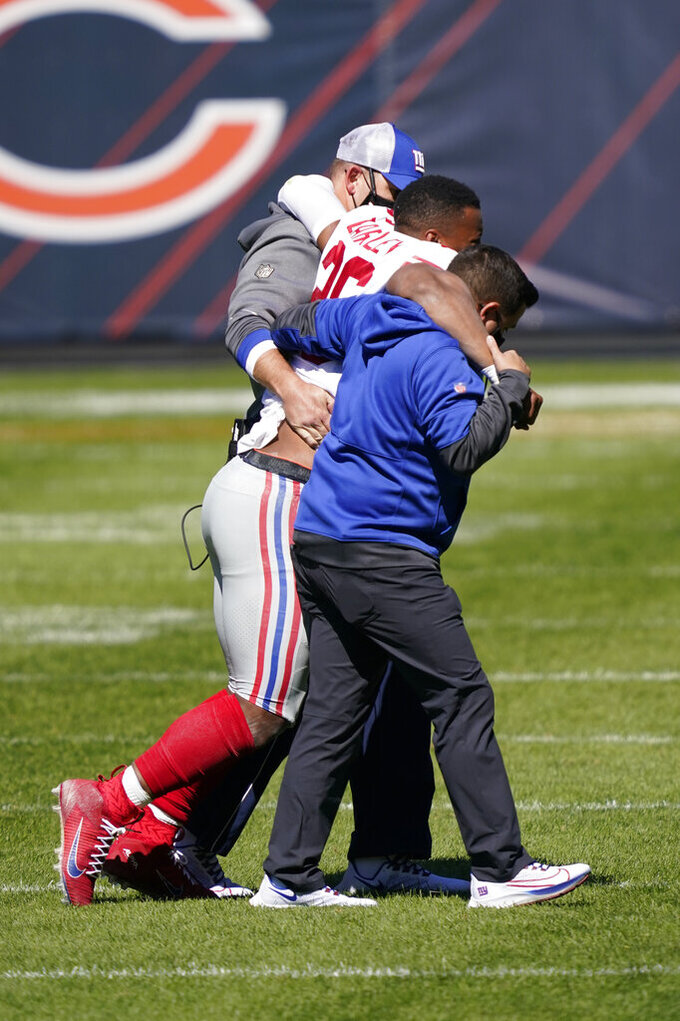 EAST RUTHERFORD, N.J. (AP) — New York Giants running back Saquon Barkley likely will miss the rest of the season with a major injury to his right knee.

The Giants (0-2) said an MRI on Monday confirmed Barkley tore the anterior cruciate ligament in the knee on Sunday in a loss to the Chicago Bears.

The 2018 NFL Offensive Rookie of the Year will undergo surgery in the near future, the team said.

Barkley went down hard on the Chicago sideline after trying to fend off Bears safety Eddie Jackson on a 6-yard carry early in the second quarter. The No. 2 overall draft choice in 2018 dragged his right leg behind him as he was helped back across the field to the Giants sideline.

After a short conversation with trainers, Barkley got on a cart and was driven into the tunnel.

The 23-year-old Barkley also seemed to be shaken up after he was tackled at the end of an 18-yard run late in the opening quarter, but he quickly re-entered the game.

Barkley gained 6 yards on 15 carries against the Steelers in the season opener, when he had no blocking support. The former Penn State star also was criticized by former Giants running back Tiki Barber for his pass-blocking skills.

With Barkley out, veteran Dion Lewis took over at halfback. New York probably will give Wayne Gallman, who was inactive for the game, more work this week as the Giants (0-2) prepare to play the San Francisco 49ers (1-1) at MetLife Stadium on Sunday.

An ankle injury in the third game of last season caused him to miss three games. He finished with 1,003 yards rushing and 52 catches. His touchdown production went from 15 to eight, with six on the ground.

Barkley had 19 carries for 34 yards this season, including four for 28 yards on Sunday.

For his career, he has gained 2,344 yards rushing and caught 149 passes. He has rushed for 17 touchdowns and caught six TDs behind a mediocre offensive line. He has not had a turnover in 646 plays.