Giants let winnable game slip away in tie vs. Commanders 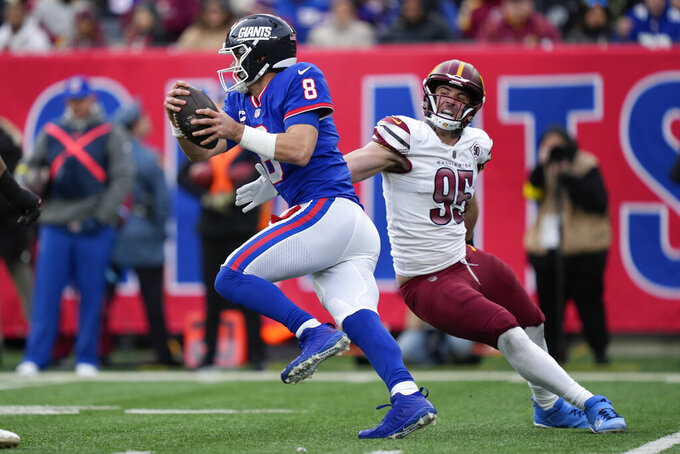 EAST RUTHERFORD, N.J. (AP) — The New York Giants are showing signs of cracking with five games left in the regular season and the playoffs on the line.

Record-wise, coach Brian Daboll's team is in the second of three wild-card spots with a 7-4-1 mark, just ahead of Seattle (7-5).

Washington, which rallied for a late touchdown to tie the Giants 20-20 tie on Sunday at MetLife Stadium, is just outside a playoff position with a 7-5-1 mark.

The concern for the Giants is they are not playing their best football. They are 1-3-1 in their last five games, and things are going to get tougher.

New York has two games left with Philadelphia (11-1) and one with Minnesota (10-2), the NFL's top two teams by record. They also have another contest with Washington on Dec. 18, which was flexed to a Sunday night game.

For the first time this season, there is some friction on the Giants. Cornerback Rodarius Williams and inside linebacker Tae Crowder both complained about their playing time after the tie.

Daboll said adversity and criticism are part of a coach's job, whether as the head guy or an assistant.

Daboll said he would talk to Crowder and Williams. He plans to approach the final stretch the same way he has approached the season. He's focusing on the Eagles this week, and that's it.

It's just another must-win game, until the next one.

Despite giving up 411 yards in total offense, Wink Martindale's defense was outstanding in earning the tie. It was on the field for 82 plays and saw the Commanders possess the ball for more than 41 minutes.

The defense also set up Daniel Jones' third-quarter touchdown pass to Isaiah Hodgins when linebacker Azeez Ojulari recorded a strip-sack and eventually recovered a fumble that teammate Oshane Ximines lost at the Washington 20. The Commanders were 3 of 14 on third down.

The offense was horrible in the second half. New York had the ball nine times in the final 40 minutes and only one possession lasted longer than five plays. The touchdown drive was five plays and 20 yards.

DT Dexter Lawrence: The big guy has had an outstanding season, and he stepped up when fellow lineman Leonard Williams was limited to 35 plays by a neck injury. He was on the field for 77 plays and had nine tackles, a sack and two quarterback hits.

C Jon Felicano. The veteran was flagged for a questionable taunting call with 5:58 to play in the fourth quarter and New York leading 20-13.

The call came after Feliciano ran downfield and flexed his muscles following a 12-yard pass from Jones to Darius Slayton to the Commanders 35. It put New York in position for Graham Gano to kick a field goal to make it a two-score game.

Gano never got the chance, Washington scored on a 90-yard drive on the ensuring series and the win disappeared. It's an inexcusable mistake, especially for a veteran playing on a team with little room for error.

Williams missed time earlier this year with a knee injury. New York can not afford him to be sidelined with the toughest part of the schedule coming up. Daboll said he'll be day to day.

Receiver Kenny Golladay, who missed Sunday with an illness and a high fever, was back in the team facility wearing a mask Monday. His temperature is lower, Daboll said.

3 — In 70 minutes of play, the Giants had three plays of 20 yards or more. It's hard to win that way, especially when your average starting point is your own 31-yard line.

The Giants renew their rivalry with the Eagles. The games are usually close. One of their four wins last season was against Philadelphia. In fact, the New Jersey Turnpikes foes have split games in each of the last two seasons.