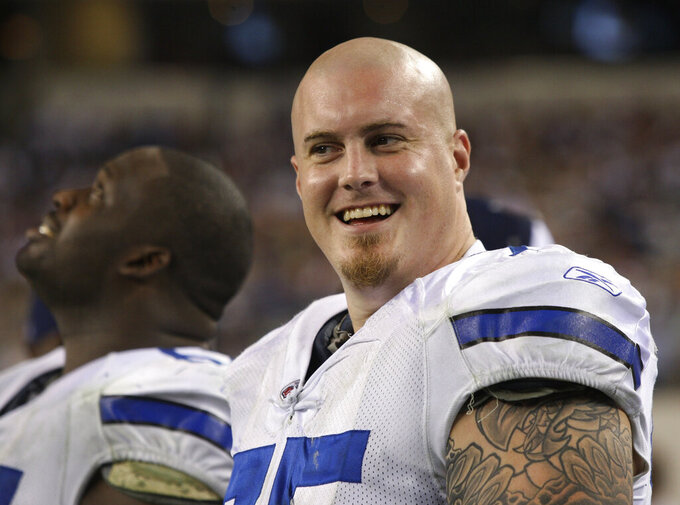 FILE - In this Aug. 21, 2009, file photo, Dallas Cowboys offensive tackle Marc Colombo, right, smiles during a preseason NFL football game against the Tennessee Titans in Arlington, Texas. Colombo was a big, nasty guy playing tackle for the Cowboys and that is just the attitude he expects from his offense line with the New York Giants. Speaking to the media for the first time since being hired earlier this year as the O-line coach, Colombo came across on Friday, Aug. 14, 2020, as a good guy who likes his heavy-metal music off the field. (AP Photo/Sharon Ellman, File)

Marc Colombo was nasty when he played tackle for the Dallas Cowboys — and that's just the attitude he expects from his offensive line with the New York Giants.

Speaking to the media for the first time since being hired in January as the O-line coach, Colombo came across Friday as a good guy who likes his heavy metal music off the field. On the field, his linemen better play with an edge, understand every little detail of their job and know why they are doing it.

“It’s a work ethic and it’s it’s a nasty attitude going out there, just kind of imposing our will on the defense,” Colombo said. “Flying around. That’s non-negotiable. That comes right from coach (Joe) Judge and this organization. You know, they demand it here. The first thing to do is work our butt off and we’re going to play hard. That’s non-negotiable.”

Colombo said he can teach techniques, assignments and stuff like that. The effort is something a player better bring every day.

That's what Colombo did during a 10-year playing career, including six with the Cowboys from 2005-10. That gives him instant respect from his players.

He has done it and seen it. He has also taught it.

“I think just learning from the experience that I have, I will be able to teach these guys, they've really absorbed a lot right now and they’re taking it all in,” said Colombo, who spent the previous four seasons working with the Cowboys' line. “I believe we'll push them in the right direction.”

That's something the Giants need. Their line has struggled the past three seasons, despite having Saquon Barkley carrying the ball the last two.

This year, the line is going to be in flux because of the coronavirus pandemic and injuries. The only returning starters are left guard Will Hernandez and right guard Kevin Zeitler.

Left tackle Nate Solder, who has a son with cancer, opted out of the season to keep his family safe. Right tackle Mike Remmers was lost to free agency and center Jon Halapio suffered an Achilles' tendon injury in the final game last year and is a free agent.

It is expected Andrew Thomas, the No. 4 overall pick in the draft, will take over at left tackle. Tackle Cam Fleming, who was in Dallas last year, signed as a free agent and was expected to compete for the right tackle job. Nick Gates was thought to be his competition but he also is getting a look at center. New York also drafted guard Shane Lemieux in the fifth round.

Hernandez, who started the past two seasons, said having a former lineman as a coach is a positive.

“He definitely has a lot of inside information as a player himself that he can pass on to us,” Hernandez said of Colombo. "As far as being there with us, he’s one of us. He’s one of the guys. Of course, you separate that title. When he’s coach, he’s coach. You have that respect line. But it’s cool having somebody who is very similar to everybody in that room and kind of gets it. He just gets it.”

Colombo actually took a couple of years away from football to play his music after retiring. He returned after realizing he missed the game.

Colombo said for a lineman, attention to detail is everything.

“I am not going to speak for every other coach in the NFL, but every little step matters,” the 41-year-old said. “If you’re not coaching every little detail of it, a player can’t get better. It’s a grind. You've got to get in there with every one of these players. You got to make sure they’re doing it exactly the way you want it.”

If players do it that way, they get better. That's what the Giants need this season, not only for Barkley but Daniel Jones as he enters his second season as quarterback.

If the Giants can do that, they can start improving after winning 12 games over the past three seasons and making the playoffs just once since winning the Super Bowl in February 2012.