Giants QB Daniel Jones not running due to injuries 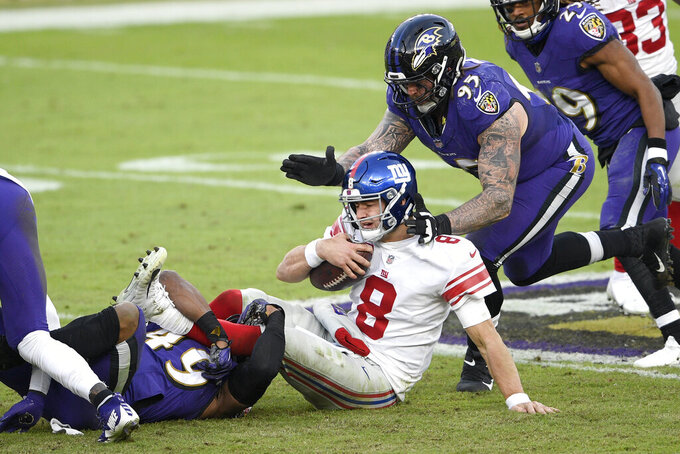 New York Giants quarterback Daniel Jones (8) is sacked by Baltimore Ravens linebacker Chris Board, let, as defensive end Derek Wolfe (95) helps bring him down during the second half of an NFL football game, Sunday, Dec. 27, 2020, in Baltimore. The Ravens won 27-13. (AP Photo/Nick Wass)

The hamstring and ankle injuries New York Giants quarterback Daniel Jones sustained in the past month have taken away one of his biggest weapons. His legs.

The Giants' second-leading rusher with 466 yards on 56 carries — that's a 7.3 yard average — Jones has only run once for 3 yards in his past two starts.

The way Jones sounded Wednesday, that's not likely to change on Sunday when the Giants (5-10) try to keep their hopes alive for an NFC East title in a game against the Dallas Cowboys (6-9).

Washington (6-9) can win the division Sunday night with a victory over Philadelphia. If the Eagles win, the team that takes the Dallas-Giants game goes to the playoffs.

The problem for the Giants, who have lost seven straight to Dallas, is Jones is limited. He hurt his right hamstring against Cincinnati in a win on Nov. 29 and missed the Seattle game the following week.

The No. 6 overall pick in the 2019 draft returned against Arizona on Dec. 13 but sprained his left ankle in a game in which he was sacked six times. Jones missed the Cleveland game on Dec. 20, and started last weekend against Baltimore, getting sacked six more times.

He was Eli Manning in recent seasons: a sitting duck in the pocket.

“I feel good, I feel healthy,” Jones said Wednesday after practice. “But I think you can tell from the tape that I’m not… I can’t do a lot of the same things I’m used to doing. I’ll continue to work and work to improve. But for the time being, I’ll probably have to adjust the way I play. I’ve been doing that the last few weeks.”

Coach Joe Judge has said the Giants are not doing to do anything to endanger Jones.

“Look, we’re going to do whatever it takes to win the game,” Judge said. “ That being said, we’re always going to consider our players’ health as the priority. We’re going to work to not put our players in any situation where we put them at greater risk of injury. That comes to how we protect him, how we call plays, and how we execute on the field.”

Jones was a full-go at practice on Wednesday, one of the first times since his injury he has not been limited early in the week. Jones refused to quantify the level of his health.

“I certainly haven’t been as involved in the run game, certain areas of getting out of the pocket, scrambling, things like that,” he said. “But I feel good. I feel a lot better, and I’ll continue to work with the trainers and improve.”

Are Jones and Judge trying to lull the Cowboys to sleep with the stakes so high? Tune in Sunday.