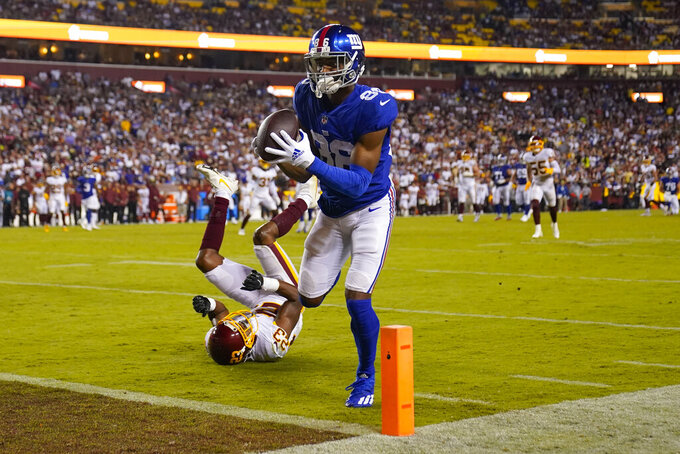 FILE - In this Sept. 16, 2021, file photo, New York Giants wide receiver Darius Slayton (86) makes a touchdown catch against Washington Football Team cornerback William Jackson (23) during the second half of an NFL football game in Landover, Md. While the Giants are once again going to be without star running back Saquon Barkley and playmaking receivers Kenny Golladay and Kadarius Toney, the offense is expected to get back wide out Slayton. (AP Photo/Alex Brandon, File) 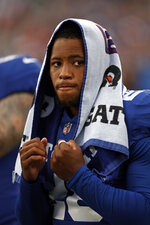 EAST RUTHERFORD, N.J. (AP) — While the New York Giants will again be without star running back Saquon Barkley and playmaking receivers Kenny Golladay and exciting rookie Kadarius Toney, the offense is expected to get back wideout Darius Slayton.

Slayton, who led the team in yards receiving in his first two NFL seasons, has missed the last three games with a hamstring injury. He warmed up on Sunday for a game against the Rams but he didn't get a jersey for the 38-11 loss that dropped New York to 1-5.

Barring a setback, Slayton is looking forward to playing against the Carolina Panthers (3-3) at MetLife Stadium on Sunday.

“He’s made progress continuously. He was close last week,” coach Joe Judge said. “We’ve done some things with him in practice this week. He’s made some progress. I think it’s fair to say that based on how he comes out of practice today, and maybe if there’s a workout Sunday morning, we’ll know then, but I’m optimistic about it.”

Barkley and Golladay have missed the last two games with knee and ankle injuries, respectively. Sterling Shepard had a hamstring injury in the same game as Slayton. He returned last week.

Slayton, listed as questionable for the Sunday's game on Friday's injury report, needed an extra week.

“I’d never really dealt with something exactly like this before,” he said. “So it was kind of hard to know, to be honest.”

The injuries have been frustrating for everyone.

“I definitely hate that for my teammates,” said Slayton, who had seven catches for 127 yards and a touchdown in two-plus games. “I know they want to play. Obviously, I want to have them all out there with me, but the guys that we have that are going to play Sunday are going to step up and make it happen.”

Toney, who had 10 catches for 189 yards against the Cowboys on Oct. 10, aggravated an ankle injury on the opening series against the Rams. He did not practice this week, along with Barkley and Golladay.

All the injuries at the skill positions, especially the wide receivers, have forced quarterback Daniel Jones to throw to a receiving corps that included Dante Pettis, Collin Johnson and C.J. Board, who broke an arm on a kickoff return against the Rams and is now on IR. The only veteran presence in the group was Shepard, who had 10 catches for 76 yards against the Rams.

Jones said not having all the pieces of the offense has made things tough.

The injury report has defensive tackle Danny Shelton listed as doubtful with a pectoral issue from last week. Shepard (hamstring) and tight end Evan Engram (calf) also are questionable, which most of the season has meant they will play for the Giants.