Gilmore: No hard feelings on Pats, excited to join Panthers 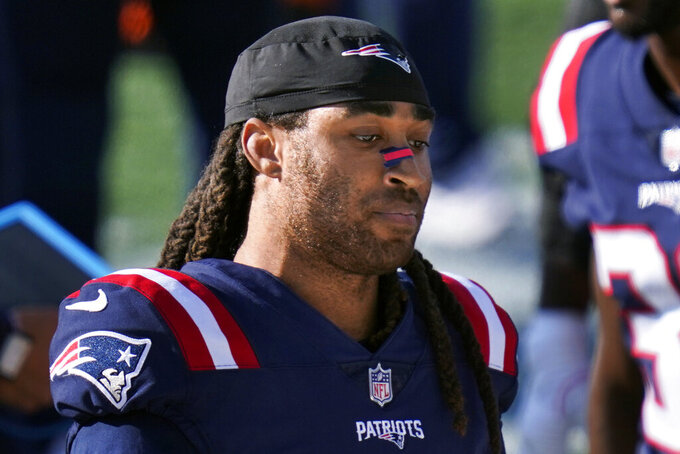 FILE - In this Oct. 18, 2020, file photo, New England Patriots cornerback Stephon Gilmore stands along the sideline during the second half of the team's NFL football game against the Denver Broncos in Foxborough, Mass. The Patriots are releasing 2019 NFL Defensive Player of the Year Stephon Gilmore after the two sides couldn’t come to terms on a new contract. (AP Photo/Charles Krupa, File)

CHARLOTTE, N.C. (AP) — Stephon Gilmore said he's excited to join the hometown Carolina Panthers team that he grew up rooting for and doesn’t harbor any ill feelings toward the New England Patriots, who traded him away less than two years after being the NFL’s Defensive Player of the Year.

“It’s a business,” Gilmore said Thursday. “It happens all of the time. I had good years there, but I’m happy to be a Panther now.”

The Patriots dealt the 31-year-old Gilmore to Carolina on Wednesday for a sixth-round pick in 2023 after the two sides were unable to come to terms on a long-term contract extension. The Panthers will pick up the remaining portion of his contract, which amounts to approximately $5.4 million.

Gilmore said the past 24 hours were “crazy,” and the sudden change in his career destination “is how it is” in the NFL.

Gilmore said Patriots coach Bill Belichick called him directly on Wednesday and informed him of the trade.

He said he was “excited” to learn he was going home to Carolina.

He grew up in Rock Hill, South Carolina, which is about 25 miles from Carolina's Bank of America Stadium. Rock Hill is also the future site of the Panthers headquarters with a scheduled completion date of 2023.

Gilmore rooted for the Panthers as a kid and said he loved watching Steve Smith Sr., Jake Delhomme, Stephen Davis and Julius Peppers and was pumped when Carolina reached the Super Bowl in the 2003 season.

“It’s a place that I always wanted to play,” said Gilmore, who spent five full seasons in Buffalo before joining the Patriots in 2017. "Looking at the team and what they got, the potential. You have to put in a lot of hard work to get to where you want to go, but for sure it was a great opportunity to come here.”

Gilmore won't be able to play until Week 7 at the earliest as he remains on the PUP list with a quadriceps injury.

He can't practice with the team but can sit in on meetings.

“I will take it a day at a time, trust the training staff and work hard and go out and do what I do when the time is right,” Gilmore said.

Fitterer indicated the Panthers would be interested in signing Gilmore to a contract extension before the end of the season. Gilmore is scheduled to become an unrestricted free agent in the spring.

“Once I get on the field everything will take care of itself," Gilmore said of his contractual situation. "I believe in that. You have to go out and make plays and show what you can do."

Like Gilmore, Horn played college football at South Carolina and two have become friends. Horn even stopped by Gilmore's house a few days before this year's NFL draft. The Panthers selected Horn No. 8 overall in April.

“We talk about different things we see,” Gilmore said of his relationship with Horn. “He’s a student of the game and I like that.”