Glazer resistance to protests at Man U has faded fans' fight 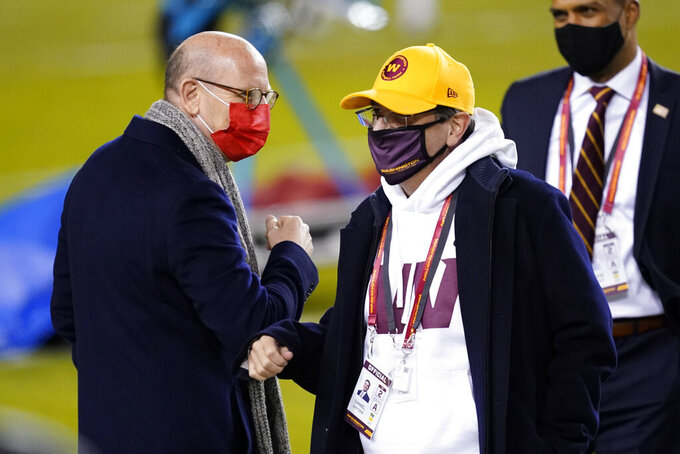 “I get that some fans don’t like us,” he said. “To hate us when the club has been so successful, it’s extraordinary.”

The co-owner’s bewilderment over vitriol came after seeing Old Trafford packed at a game in 2010 with green-and-gold scarves being waved by fans who, in a show of dissent, adopted the club’s colors from its 1878 formation.

The insight into ownership’s thinking was revealed in a book by a former staff member, necessary by the lack of any public comment by the Glazer family. The silence has highlighted the lack of any attempt to heal the rift. The Glazers have staunchly maintained a distance from supporters, who have not mounted any sustained fight to oust them.

Contrast, then, the Glazers' passion and joy last month after seeing the family’s other sports team — the Tampa Bay Buccaneers — win at Green Bay to advance to a Super Bowl matchup against the Kansas City Chiefs this weekend. The family doesn’t talk to fans or media in England, let alone Manchester, in the manner similar to the way they explain their decisions at the Bucs, often at length.

This could be the Glazers’ most successful year on both sides of the Atlantic since 2003, when the Buccaneers last won the Super Bowl and United won the English Premier League. United is mounting its best title challenge since winning its record 20th English league trophy in 2013.

Just don’t expect to see any public celebrations in England featuring the six siblings of the late Malcolm Glazer who control United.

Joe Glazer stated the family has a policy of a “reluctance to engage” in a parting message to his media adviser Tehsin Nayani, whose publication of exchanges with his boss in a 2015 book, “The Glazer Gatekeeper," showed internal discussions about the tumult and loathing of the family’s ownership.

Despite a public offering of Manchester United on the New York Stock Exchange in 2012, the Glazers remain in control approaching the 16th anniversary of their takeover. The valuation of the club has risen to around $3 billion, ending hopes of a fan takeover.

In 2005, the Glazers arrived to effigies being burned in the streets outside Old Trafford. A club with no debt before the takeover has been paying the price of the leveraged takeover ever since, with payments on interest, debt and dividends to the Glazers costing United more than 1 billion pounds ($1.5 billion).

“The thing that’s protected Manchester United against any trouble is the commercial nature of their machine which is very similar to what they have been able to deliver in Tampa,” said Rob Wilson, who lectures at Sheffield Hallam University in northern England.

United’s revenue has swelled from 166.4 million pounds ($300 million) in the year before the takeover in 2005 to a record 627.1 million pounds ($783 million) in 2018-19 before the pandemic. But while the Glazers have overseen an expansion of the club’s commercial operations — licensing the brand to an array of commercial products across the world — United was already the second-highest moneymaker in world football in 2005 and was now in fourth place.

United did not need the Glazers in 2005 to transform a team longing to win the championship again, as was seen with the arrival of Roman Abramovich at Chelsea in 2003, Sheik Mansour’s Abu Dhabi buyout of Manchester City in 2008, and with fellow American sports tycoons from the Boston Red Sox at Liverpool in 2010.

United had won the Premier League eight times in 13 years before the Glazers arrived, a return to dominance engineered by manager Alex Ferguson. He would win the league another five times — and the Champions League again — before retiring in 2013 despite austerity in the transfer market.

Replacing Ferguson after 26 years in charge has proved trickier than imagined for a team on its fourth manager since 2013. The only Premier League title parades these days in Manchester are staged by neighbor City, which collected the trophy for the first time only in 2012.

While Ferguson contested four Champions League finals and won two, United hasn’t advanced further than the quarterfinals since then. And that’s despite the type of lavish spending Ferguson never received, with more than 1 billion pounds splurged on players in eight years.

“Every year that passes, the genius of Ferguson’s ability to remain competitive is emphasized,” Patterson said.

Patterson was particularly troubled by Ed Glazer donating hundreds of thousands of dollars to support both of Donald Trump’s presidential election campaigns. On the same day in 2019 that Glazer hosted a fundraiser for Trump — who has been denounced for racist tweets — United was demanding action from social media companies against racist abuse sent to midfielder Paul Pogba.

“Sections of the fanbase have been passive during periods of success,” Patterson said of the Glazers. “But they’re poison.”

Such extreme rhetoric from a high-profile fan is not reflected in any sustained opposition. Opposition persists to their ownership but groups like the Manchester United Supporters’ Trust lost momentum after the high of the green-and-gold publicity of 2010.

While the Glazers won’t speak to MUST, the group has toned down its public comments against them and seems to focus instead on engagement with the administration in Manchester about the matchday experience to secure improvements.

“We don’t believe the best response is to revert to a hostile relationship with the board which would be the result if we chose protest rather than dialogue,” MUST said in 2019.

Even though the Glazers have done little to win over fans -- apart from freezing season ticket prices in a stadium increasingly looking outdated -- it seems the United faithful has given up trying to force them out. The most recent expression of dissent was collectively with rival fan groups over the Glazers being involved in a power-grab to overhaul the English leagues.

“You are better having a voice inside the tent than trying to shout from the outside,” Wilson said. “The protests have been a bit cyclical which have tended to follow some of the sporting performance.”

And just at a time when fans are shut out of stadiums, United is a realistic Premier League contender this late in the season for the first time since Ferguson vacated the dugout. Three immediate successors failed, but former player Ole Gunnar Solskjær is drawing inspiration from the Buccaneers in the title challenge -- particularly the role of their veteran superstar on Super Bowl weekend.

“Tom Brady is an example for every single sportsman out there that it’s still possible even at the age of 42,” Solskjær said. “We tell our young players that to be at the top level, it’s not just natural talent, it’s dedication it’s hard work, it’s focus.”

At United, the Glazers’ focus seems very much on profit and success but no rapprochement with supporters.