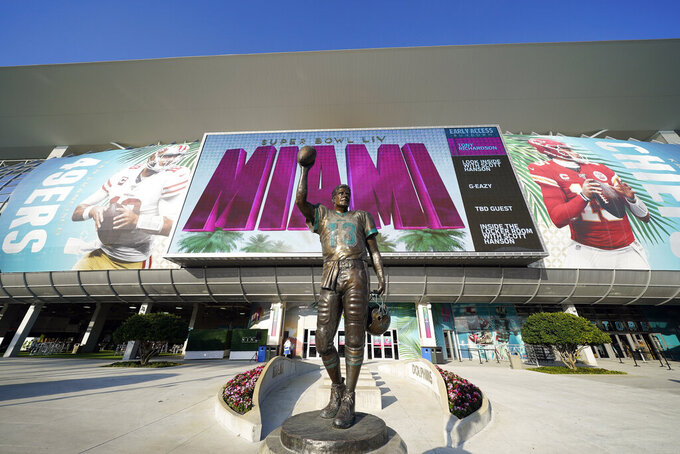 He’ll work there again Sunday, in a very different capacity than his last job.

Fenton is a rookie cornerback for the Kansas City Chiefs, with a most unusual story. He worked at Hard Rock on Sundays when he was in high school, helping with the concession operations during Miami Dolphins games. He’d walk to the stadium, do his job for a few hours, then walk back home.

“I never would have thought I’d be going to the Super Bowl,” said Fenton, who grew up in Miami Gardens -- where the stadium is — a long way from famed South Beach.

Roughly one in four residents of Miami Gardens, the suburb where Super Bowl 54 between the Chiefs and the San Francisco 49ers will be played Sunday, live below the poverty line. An overwhelming majority of those residents don’t have college degrees, according to U.S. Census statistics. And the median household annual income is somewhere around $43,000.

Put another way, a suite can cost what the typical Miami Gardens household makes in seven years.

As with any big event, especially in a major city where all aspects of the socioeconomic spectrum are represented, the Super Bowl is simply unaffordable for most people who live there. The NFL knows that and offers countless free and relatively low-priced events so people can experience some elements of Super Bowl week, but tickets for most are a pipe dream.

There will be about 65,000 people in the stadium Sunday, and money to some of them will be no object when it comes to arranging black car service, high-end spirits and fine dining -- creating a wild dichotomy when compared to the reality of everyday life for most people.

Fenton beat the odds. He earned his way there.

“Guys like Rashad, we need his stories because he represents hope,” said Aubrey Hill, an assistant coach at FIU and Fenton’s high school coach. “Kids need hope here because of their daily hardships. There can be gun violence in your neighborhood, but someone is going to the Super Bowl, that’s hope. If mom or dad isn’t there and they’re being raised by a grandparent, they need hope. They need hope from the people like Rashad. He’s a constant reminder for the kid who’s been beaten down and needs positive reinforcement.”

Anthony Walker Jr. is a Miami native and plays for the Indianapolis Colts. He grew up in a single-parent household and rarely went to Dolphins games as a kid, spending most of those NFL Sundays watching on television instead.

After going to college at Northwestern, one time interning with the Miami Heat and now having completed three seasons with the Colts, Walker doesn’t want for much now. His biggest delight since going pro was being able to buy his dad a car, fulfilling a promise he made years earlier as a kid. But he also tries to educate people on the misguided -- yet somehow widespread -- notion that Miami is all beaches, luxury cars and mansions.

“It’s a little weird,” said Walker, who isn’t going to the Super Bowl and gave his tickets away. “Somebody talked about it the other day, when somebody said ‘We’re going to South Beach’ and someone had to tell them, ‘No, it’s in Miami Gardens.’ People think about Miami and they think South Beach, and you let them know the difference. I say it’s in the heart of football.”

Go a mile in any direction from the stadium, where people will be spending wildly on food, drink, tickets and whatever else, and you’ll find something that shows how tough things are for residents.

A run-down field. A closed business. A horse track that used to bustle and now is barely used.

“It’s a hard-hat community in a hard-hat area with hard-hat high school teams,” Hill said. “These kids, their parents or grandparents got up to work every day and worked a hard job. They transfer that work ethic going forward. And there’s a lot of pride in that.”