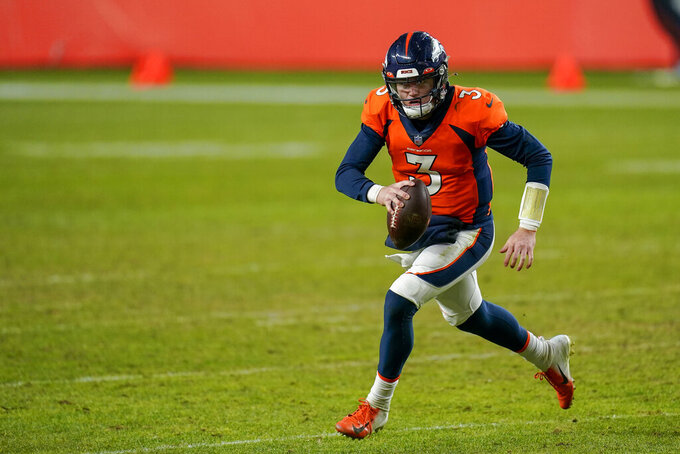 FILE - In this Jan. 3, 2021, file photo, Denver Broncos quarterback Drew Lock scrambles against the Las Vegas Raiders during an NFL football game in Denver. “We're really high on Drew. I like seeing Drew here every morning and when I come in he's working hard, he's trending in the right direction. As you know, he has a lot of talent. He's becoming a better pro," general manager George Paton said at his pre-draft news conference. “But we're still going to look at the quarterback position.” (AP Photo/Jack Dempsey, File)

What the Broncos' new general manager hasn't addressed is the franchise's biggest bugaboo — quarterback — after declaring last month “we want to bring in competition” for Drew Lock, whose 15 interceptions in 13 games tied for the league lead in 2020.

“We're really high on Drew," Paton said at his pre-draft news conference. "I like seeing Drew here every morning and when I come in he’s working hard, he’s trending in the right direction. As you know, he has a lot of talent. He’s becoming a better pro.

“But we're still going to look at the quarterback position.”

That's his message to an increasingly anxious fan base that has watched the Broncos churn through a dozen signal callers since Hall of Famer Peyton Manning retired five years ago.

“We want to get the right guy, and we still have time," Paton said.

Lock can expect that competition to arrive soon, if not in the draft, then in its wake.

“The landscape may change after the draft,” Paton said. "If a team drafts one, maybe that (incumbent) quarterback is on the market. We’re going to be patient and not force it. We realize we want competition, and I’ve said that since I’ve gotten here. That hasn’t changed.”

The Broncos own the ninth overall pick in the draft and they have three selections in the top 75, giving Paton the ammo to move up if necessary to grab one of this year's intriguing QB prospects.

Although the Vikings never moved up in the first round while Paton was serving his extended apprenticeship under Minnesota GM Rick Spielman, Paton said he wouldn't hesitate to trade up, adding, “there may be players in this draft that are worthy of that.”

Like QBs Justin Fields or Trey Lance, for instance.

NFL Network draft analyst Daniel Jeremiah also is a big fan of Lock's, but he said he'd go with Lance or Fields if they were available.

“I knew Drew has some ups and downs, but you see the flashes of what he can do. He's got a ton of ability,” Jeremiah said. “So, if you're asking me if they're sticking and picking ... at No. 9 and either Lance or Fields were there, even though you have some other areas (of need) and even though you can make a case (of) ‘Let’s give Drew Lock a little more time,' I couldn't pass up either of those guys."

If the choice were between sticking with Lock or going with Mac Jones, however, Jeremiah would stand pat.

“Mac has been a little more accurate and maybe a little bit more consistent,” Jeremiah said. “I think I would still dream on what Drew Lock can be and probably stick with him if that were to be the decision.”

Some subplots to consider when the Broncos are on the clock:

Elway, who remains president of football operations, gave full authority to Paton to oversee the personnel department and roster and said he wouldn't mettle. But his fingerprints might still end up on this draft class.

“John has played a great role and he’s been a great resource for me,” Paton said. “I have him watching certain positions. He’s been in this role and I haven’t. So, what a sounding board for me to have John right next door. It’s been amazing to have him.”

It would seem Rashawn Slater of Northwestern or Penei Sewell of Oregon aren't in the Broncos' plans at No. 9 given what Paton said about Ja'Wuan James.

Paton said James, who was a COVID-19 opt out last year after missing almost all of 2019 with a balky knee following his blockbuster free agency signing, is among the 20-some Broncos who are working out during the offseason program, and “he looks great and the expectation is he starts at right tackle and he plays well.”

Paton kept the Broncos' grading system in place while evaluating this draft class to make it easier on the coaches, college scouts and pro scouts.

“I didn't want to change 30 people. It's easier for me to change," he said. "We've made a lot of adjustments within that scale, the way we run our meetings and the philosophies, but we did keep the grading scale intact.