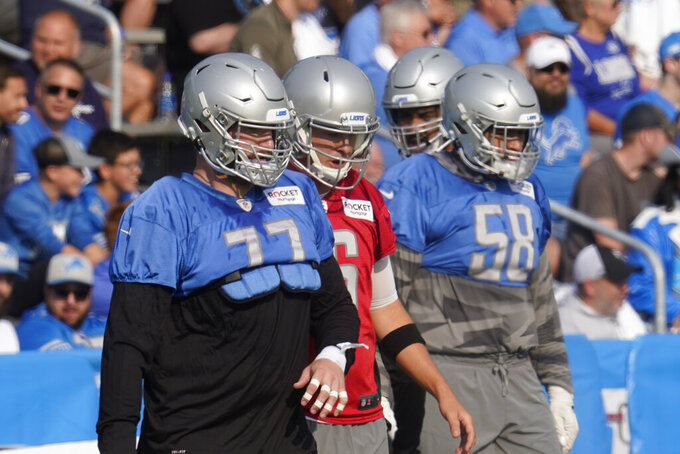 ALLEN PARK, Mich. (AP) — Jared Goff is the new guy in charge of the offense for the Detroit Lions, and he's already found a comfort zone with his new teammates.

“That’s always part of your job as the quarterback, especially for me with new faces, new system,” Goff said. “I’m trying to give them stuff that I like and that I know.”

After five seasons with the Los Angeles Rams, Goff was traded, along with two first-round picks and a third-rounder, to Detroit for long-time Lions quarterback Matthew Stafford. The trade reunited Goff with new Lions general manager Brad Holmes, who had a hand in drafting Goff in 2016 as the Rams’ director of college scouting.

Since the trade became official in March, the Lions have asked Goff for his input on the team’s new offensive scheme, and they’ve come away impressed with how much he’s taken charge.

“You can see how much more comfortable he is and how much more he has taken ownership of this offense,” Lions coach Dan Campbell said.

One strategy that Goff hopes to bring to the Lions offense is the deep ball. During his two Pro Bowl seasons with the Rams, Goff averaged 8.2 yards per passing attempt, the sixth-highest mark of any quarterback over those two years. That number dropped to just 7.3 yards per attempt in the following two seasons combined. In Detroit, he’s hoping to get back to what he does best.

“I love to take shots,” Goff said. “I know we’re going to call a whole bunch of them, and I hope to throw a lot of them.”

Goff has also taken the initiative of getting to know his new receivers with private workouts this offseason. He met with top receiver Tyrell Williams and Pro Bowl tight end T.J. Hockenson out in California hoping to develop a chemistry — not just on the field but off it, too.

“We hung out a few times,” Hockenson said. “He’s a great dude. Love hanging out with him. Just building that rapport throughout the offseason and throughout training camp is huge for both of us.”

Goff's new teammates are starting to see that work pay off on the field. Left tackle Taylor Decker, who has known Goff since they were both selected in the same year’s draft, has come away extremely impressed with his new quarterback’s play.

“Goff is phenomenally talented,” Decker said. “You see him out there running the show, getting the passes, coordinating the protection. He does a great job. So I’m really excited to work with him.”

From the outside, the Lions may not look like a team that is ready to contend in 2021. They finished last year with a 5-11 record, leading to a complete overhaul of the coaching staff, front office and player roster. Detroit hasn’t won a division title since 1993, hasn’t won a playoff game since 1991, and the last of its four NFL championships was in 1957.

Regardless, Goff believes the Lions’ goal should be the same as any other team.

“We want to win the division first, and from there, you go to the playoffs and win a championship," said Goff, who led the Rams to the 2019 Super Bowl, a 13-3 loss to the New England Patriots. "That’s always the expectation. That’s always the goal. I know that hasn’t happened here in a long time, but that’s our expectation. There’s one team happy at the end of the year, and we want to be that one team.”

As for the doubters, Goff thinks he can work them to his advantage.

“It’s always fun to be the underdog,” he said. “Coming into games, teams can take you lightly. If that’s the case, we’re excited for it.”

NOTES: Melissa Gonzalez, who is married to Lions quarterback David Blough, qualified for the Olympics semifinals in the women’s 400-meter hurdles Friday night. The Lions held a watch party for Blough at the team facility. “Coach Campbell and this staff has made this more special than it already was,” Blough said. ... Saturday’s practice was held in front of season-ticket owners, the Lions’ first practice in front of fans since the COVID-19 pandemic.