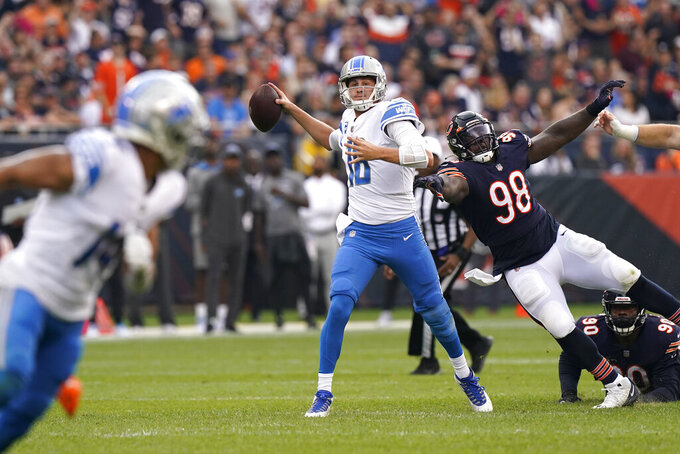 OPENING LINE: Rams by 15 1/2, according to FanDuel SportsBook.

TURNOVER DIFFERENTIAL: Lions minus-1; Rams plus-3.

LIONS PLAYER TO WATCH: QB Jared Goff hasn’t exactly shown the Rams were wrong to jettison him in the blockbuster trade that netted them Matthew Stafford, averaging 6.3 yards per pass attempt with seven touchdowns against four interceptions in Detroit. But it’s hard to judge given the lack of talent on a roster clearly in rebuilding mode. To his credit, Goff keeps fighting, with 697 yards on 69 of 100 passing attempts in the fourth quarter to lead the league in all three categories.

RAMS PLAYER TO WATCH: Stafford will face the Lions for the first time after playing 12 seasons there. He has been generating big plays for his new team, producing 27 pass plays of 20 or more yards through six weeks. Stafford’s 16 touchdown passes rank third in the NFL behind only Patrick Mahomes (18) and Tom Brady (17). Credit strong pass protection for helping Stafford make the most of his new settings, as he has been sacked just six times.

KEY MATCHUP: Lions rookie LT Penei Sewell vs. Rams OLB Leonard Floyd. Detroit’s pass protection has been solid enough to qualify as a bright spot given all the struggles elsewhere, allowing sacks on 6.3% of dropbacks. But with Goff attempting the fifth-most passes in the NFL, that still adds up to 15 sacks allowed. Sewell will be tested by Floyd, who had 1 1/2 sacks, a forced fumble and a fumble recovery against the Giants.

KEY INJURIES: Lions TE T.J. Hockenson is dealing with a knee injury. If he cannot play, it would deprive Goff of one of his most productive options in the passing game, as Hockenson is one of three tight ends with 8-plus catches in three games this season. … Rams RB Sony Michel is expected to play through a shoulder injury.

STATS AND STUFF: Detroit is the NFL’s only winless team and has lost 10 straight, going back to last year, for the league’s longest active losing streak. … The Lions lead the league in receptions (50) and yards receiving (394) by RBs. D’Andre Swift has 34 receptions for 295 yards, tying him for the most among NFL running backs. … Lions DT Michael Brockers played his first nine seasons in the NFL for the Rams, getting 48 tackles for loss and 28 sacks in 138 games. He has three tackles for loss and one sack in six games this season. … Detroit WR Amon-Ra St. Brown ranks fourth among rookies with 24 receptions. St. Brown, an Orange County native who played at USC, has 18 catches in his past two games. … Rams DL Aaron Donald has six sacks in three career games against the Lions. … Los Angeles is the least-penalized team in the NFL, having been flagged 24 times for 226 yards. … Rams WR Cooper Kupp leads the league in receptions (46), touchdown catches (7) and targets (68). He ranks second in yards receiving (653) and third in yards after the catch (265).

FANTASY TIP: Not that anyone needs an excuse to consider Kupp a lock WR1 at this point, but the Lions have proven especially vulnerable to top-tier pass catchers this season. Deebo Samuel, Davante Adams and Justin Jefferson each topped 100 yards receiving, and rookie Ja’Marr Chase came up 3 yards shy of the century mark last Sunday. Everything is set up for Kupp to continue piling up big numbers this week.