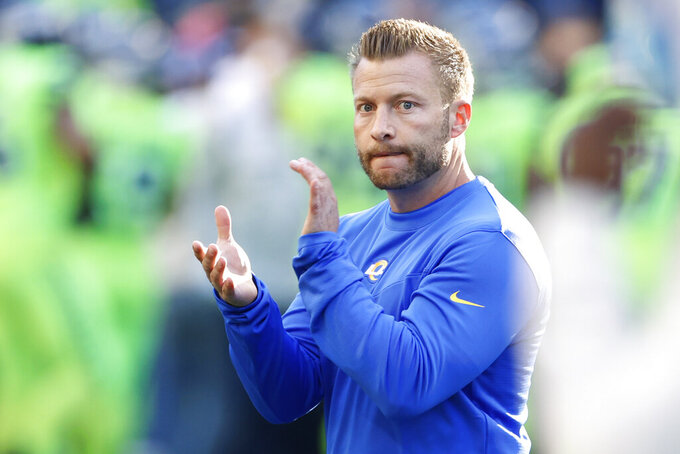 INGLEWOOD, Calif. (AP) — Jared Goff was the Rams' first draft pick after their return to Los Angeles a half-decade ago — the new quarterback for the franchise's new era.

The tall, blond California native was a face of the Rams during their transformation from a longtime loser to a perennial title contender under coach Sean McVay. Goff made two Pro Bowls while leading Los Angeles to three playoff berths, two NFC West titles and a Super Bowl appearance.

And he was blindsided when McVay and the Rams traded him to the Detroit Lions last winter.

Goff claims he sensed no discontent with him from McVay or general manager Les Snead, and he had a massive new contract extension that hadn’t even started before Los Angeles shipped him out for Matthew Stafford.

Nearly nine months later, the shock has worn off for Goff, even if the disappointment lingers.

“I’ve got so many great memories, and so many friendships and lifelong bonds,” Goff said. “I think the sourness is there still from how it ended, but there are so much more good things that happened, that make you appreciative for those times, and appreciative that you’re able to experience them.”

Goff leads the Lions (0-6) into SoFi Stadium on Sunday to face the powerhouse Rams (5-1) in a potentially one-sided matchup that's much more interesting because of the franchises' mingled history. Along with that blockbuster swap of quarterbacks, Detroit also got top executive Brad Holmes and stalwart defensive tackle Michael Brockers from the Rams over the past year.

Goff led the Rams to their first victory in owner Stan Kroenke's multibillion-dollar football palace last season, but he never got to play there in front of a crowd. Goff seems likely to get pregame cheers from the fans who appreciate his role in the Rams' growth, even if Stafford appears to be taking them to a higher level.

“I think it would be selfish to me to let any emotion get to me," Goff said. “Of course, pregame you’re going to see your friends and your old teammates, old coaches, old staff members, and it will be good to see them. But when that whistle blows, it’s the same as any other game.”

If Goff leads the Lions to a monumental upset, it will be the first victory of his six-year NFL career without McVay coaching him. The Rams went 0-7 with Goff as their rookie starter in 2016.

McVay strenuously avoids any public criticism of any players, so he has never openly discussed why he gave up on Goff. The coach acknowledges he should have orchestrated their breakup with more grace, and he expects a warm reunion before the game.

“There are certainly things I would do it a little bit differently when those situations arise in the future,” McVay said. "But I think Jared knows the respect that I have for him. ... To say that it was perfectly handled on my end, I wouldn’t be totally accurate in that.”

Although Stafford spent a dozen years in Detroit, he won't see as many familiar faces as Goff on Sunday. The Lions are rebuilding, but Stafford is still looking forward to going against the young Detroit defensive backs he faced in practice.

“There’s a bunch of people out there that I don’t know that are on the Lions now,” Stafford said. “I'll enjoy getting the chance to see some of those guys that I’ve spent a lot of time and played a lot of meaningful football with.”

Brockers spent nine years with the Rams as a team leader and a defensive cornerstone, playing at Aaron Donald's side for the superstar's entire career. But Brockers chose financial comfort over Super Bowl contention: The Rams wanted to restructure his contract to fit under the salary cap, while the Lions gave him a new three-year, $24 million deal through 2023 with $11 million guaranteed.

“We wanted to be able to continue to work (together), have him back here,” McVay said. “And for whatever reason, it didn’t work out.”

There are levels to losing, and the Lions seem to find them. The first franchise to have an 0-16 season already has fans grumbling about the possibility of witnessing an 0-17 season with first-year coach Dan Campbell. The league’s only winless team hasn’t snapped the ball on offense with the lead this season, the fourth team since 1991 to do that in its first six games. The Lions also became the first team in league history to lose two games in a season on game-winning kicks of 50-plus yards with no time left.

The Rams are 15 1/2-point favorites, but they're also less than a year removed from the most embarrassing day of McVay's career: A 23-20 home loss to the New York Jets, who were 0-13. The game was a career lowlight both for McVay, who made several head-scratching play calls and timeout decisions, and for Goff, who went 22 of 34 and couldn't lead a touchdown drive until the Rams were down by 17 points.

The Rams' slow offensive starts have bothered McVay, but the Lions have gone scoreless in the first half in three of their past four games. Detroit hasn’t had a touchdown in the first half since the opening drive in Week 2.

“We’re not equipped to throw the ball 40, 50 times a game and drop back,” Campbell said. “We’re not. That’s not us. I think there are very few teams that are equipped to do that, but I know we’re not, for sure. So if we don’t keep ourselves in this game, it makes it hard for us.”