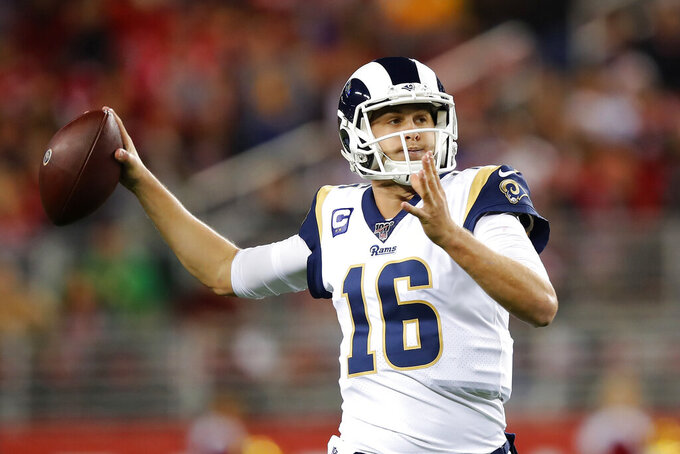 THOUSAND OAKS, Calif. (AP) — By the time quarterback Jared Goff bounced back after a miserable November, the Los Angeles Rams’ season was already all but lost.

Goff wants to close out a strong final month with another good performance against Arizona on Sunday, but it cannot mask the disappointment of not making the playoffs.

“For me, personally, but more so just our offense in general, feeling like we were able to do some good things is definitely good, but it’s never a consolation,” Goff said.

Goff has completed 66.7% of his passes for 1,324 yards with eight touchdowns and four interceptions in four December games, but he is still sore about the one pick he threw in the 34-31 loss at San Francisco on Saturday that eliminated the Rams (8-7) from postseason contention.

Trying to lead a two-minute drive at the end of the first half, Goff attempted to thread a swing pass to Malcolm Brown out near midfield. It was intercepted by linebacker Fred Warner and returned 46 yards for a touchdown that gave the 49ers a 24-21 lead.

Goff called it a “dumb play,” a throw he never should have made.

“I can’t do that to our team,” Goff said. “I talked about it the other day, it’s not something I ever want to put us in that situation, especially at the end of a half. Let them back in the game like that, give them some momentum, it’s just one that will eat at me, but one that I will learn from, for sure.”

Goff has plenty of mistakes to learn from, throwing a career-high 16 interceptions this season after combining for 19 picks in 31 games in his first two seasons under coach Sean McVay. Goff’s worst stretch of play came in November, when he threw five interceptions without a touchdown in three games.

The turnaround this month has been the result of a back-to-basics approach using more play-action and rollouts to get Goff on the move. McVay said it is also a reflection of improvement around Goff, including a reconfigured offensive line that has built some continuity.

“Any time that you’re talking about the pass game, it’s also a representation of all 11,” McVay said. “You’ve got to have protection, you’ve got to play within the timing and rhythm. Guys have to separate, you’ve got to distribute the field the right way – a lot of things have gone into that.”

The month started with Goff’s best performance of the season in a 34-7 win at the Cardinals. Goff was 32 of 43 passing for 424 yards and two touchdowns, setting season highs in completion percentage (74.4) and yardage. It was also one of five games in which Goff has not thrown an interception.

“We played well,” Goff said. “We were able to protect really well and move me off my spot a bunch. I felt good.”

Goff credits his improvement in the final month of 2019 to being more locked in, hoping one more effective performance can help set the stage for better things in 2020.

“But I didn’t change my process, I didn’t change my routine, I didn’t change anything,” Goff said. “It happens when you go through ups and downs, and ultimately you want to be on the ups a lot more than the downs. By no means has this season been up to my standard or our team’s standard, but it’ll be one that I’ll always look back on, hopefully learn from and be happy that we did go through this in the long run.”

NOTES: DE Michael Brockers (knee) did not practice Thursday but McVay expects him to play.