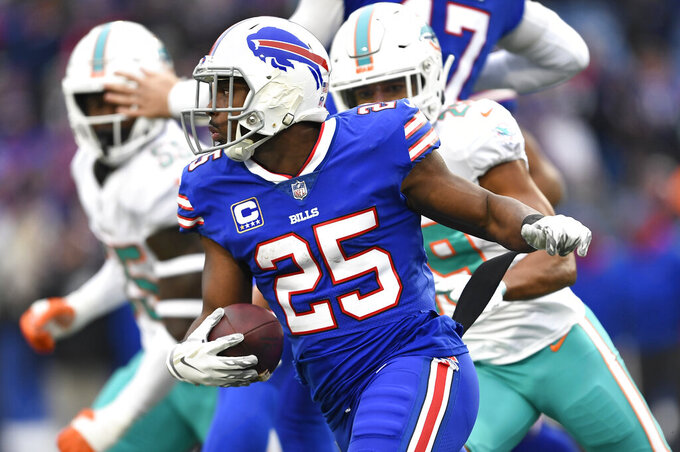 FILE - In this Dec. 30, 2018, file photo, Buffalo Bills running back LeSean McCoy (25) rushes against the Miami Dolphins during the first half of an NFL football game in Orchard Park, N.Y. Running back Frank Gore sees nothing funny about teaming up with McCoy in Buffalo to form the NFL's oldest backfield. Instead, Gore sees no reason why the pair of 30-somethings can't continue their lengthy run of dominance. (AP Photo/Adrian Kraus, File)

Running back Frank Gore sees nothing funny about teaming up with LeSean McCoy in Buffalo to form the NFL's oldest backfield. Instead, Gore sees no reason why the pair of 30-somethings can't continue their lengthy run of dominance.

"It doesn't matter what age you are," the 35-year-old Gore said Thursday after arriving at the Bills' facility to sign a one-year, $2 million contract . "As long as you train and believe in your skill, anything can happen. You can get the job done. And that's what me and 'Shady' are going to try to do this year."

The 30-year-old McCoy, who goes by the nickname Shady, referred to Gore's addition as motivating. Not only are the two close friends and offseason workout partners, McCoy called Gore a role model.

"There's not a lot of guys in the league right now that can motivate me, especially at running back. But he's the type of guy that can," McCoy told The Associated Press in his first comments since Buffalo signed Gore.

Though it was the Bills' decision to make an offer to Gore to play for a 15th season, McCoy played a recruiting role.

Once Gore was informed of the Bills' interest, he contacted McCoy to make sure he was fine with sharing the load.

"Shady's a competitive guy. He didn't really care," Gore said. "He knows what type of mindset I've got, how much I love the game of football. And he said he would love to play with me, and that I can help him out a whole lot."

McCoy laughed in saying Gore was actually talking about retiring when the two were together last weekend.

Gore is one of nine free agents the Bills added this past week, including return specialist Andre Roberts, who signed a two-year contract on Thursday. A majority of Buffalo's attention was placed on upgrading a patchwork offense that finished 30th in the NFL in yards gained last season.

Gore might not fill the biggest need on a team that invested heavily in signing receivers John Brown and Cole Beasley, and center Mitch Morse.

For general manager Brandon Beane, what stands out about Gore is how he's maintained his level of production and competitiveness.

"You saw it today," Beane said.

"He walked down the hall with a Buffalo Bills helmet on his head. I mean, the guy's serious," he added. "When he talks to you, he sits on the edge of his chair. He starts dropping a few words that you might hear on the field. His intensity started ratcheting quick."

Since breaking into the NFL with San Francisco in 2005, Gore has topped 1,000 yards rushing nine times, most recently with Indianapolis in 2016. And he's coming off a season in which he had 722 yards rushing and 124 yards receiving and a touchdown in 14 games with Miami.

Gore said he still has plenty to prove.

"People feel that when you get to a certain age that you can't. And I want to show them that it doesn't matter," he said.

Aside from age, Gore and McCoy form what stands as the NFL's most productive running back tandem.

Often times, McCoy has praised Gore for his workout regimen and also as someone he aspires to one day catch on the career list.

"Every time I tell myself I'll play three more years and I'll be done, I look at a guy like Frank, who keeps trucking along," McCoy said. "So for myself, he's great for me so I can monitor his game and try to get to where he's at — the Hall of Fame."

It's not lost on both players that McCoy is coming off the worst season of his career. He finished with a career-low 514 yards rushing with three touchdowns, and topped 100 yards rushing just once.

Gore said the two will have the potential to push each other.

"I know he's very competitive. And I know he's going to get back to where he's been before because I've seen him train," Gore said. "I know if I see him going hard, I'm going to have to try to come back and go hard as well. It'll be a good thing."

Gore immediately got on the phone to McCoy to rave about the free-agent additions.

McCoy's mood brightened when he heard from Gore.

"I'm being honest, talking to him, and him coming up and telling me the guys we got there, the linemen, I'm excited," McCoy said. "I'm excited again, man. Ready to play some ball."

NOTES: The free-agent additions has the fan base excited. One Bills fan posted pictures of going to the airport to greet several players, including Morse, Beasley and Brown with an order of chicken wings. ... Beane said free agent defensive end Ezekiel 'Ziggy' Ansah visited the Bills facility before leaving to meet with another team.