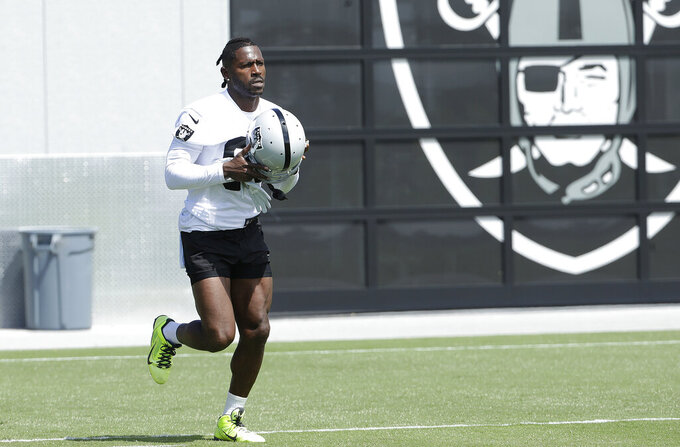 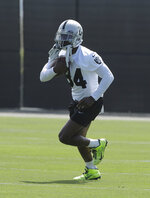 ALAMEDA, Calif. (AP) — Antonio Brown's credentials were well established long before he arrived in Oakland as the Raiders new No. 1 receiver.

Brown posted six straight 100-catch seasons for the Steelers with quarterback Ben Roethlisberger and was the NFL's most prolific receiver before he forced his way out of Pittsburgh to join the Raiders in March.

Those impressive credentials mean little to coach Jon Gruden, who is pushing Brown as hard as any of his other receivers as Oakland begins preparations for the 2019 season. It's a similar approach to the one Gruden took during his first stint in Oakland, when he inherited future Hall of Fame receiver Tim Brown and then added the game's most productive receiver ever in Jerry Rice.

"He challenged me from the meeting room to the field," Brown said Tuesday of Gruden. "Lining me up at all kind of positions, hurrying up the offense's tempo to see if I'm able to mentally pick up what I'm doing, where I'm lining up really fast. So, it's never a dull day with coach. Always challenging, always high energy and always detailed and fundamental in regards to our assignment."

While Gruden is holding Brown to a high standard, Brown does the same to his fellow receivers on the roster. He has instituted a fine system for dropped passes in practice and wants to set an example with his strong work ethic for the rest of the players in the receivers' room.

Gruden had been enamored with Brown since his days as an announcer, calling him the hardest working player he had ever seen. Now the rest of the Raiders are seeing what Gruden meant.

"He's showed that when he's been out here," offensive coordinator Greg Olson said. "If you're in that group, especially if you're in that wide receiver group, you're going to have to jump in and follow his lead. Again, he doesn't ask them to do anything that he doesn't do. That's what's real impressive about it. He hadn't backed off a bit even though his experience in this league has been so long, he still practices at a very high level."

Brown has been one of the league's most prolific players. He was an All-Pro four straight years from 2014-17 and is the first player with at least 100 catches and 1,200 yards receiving in six straight seasons. His 686 catches and 9,145 yards since 2013 are the most for any player in a six-year span.

But despite that production, he wore out his welcome in Pittsburgh and was acquired by Oakland in March for picks in the third and fifth round of the 2019 draft.

Brown was benched by coach Mike Tomlin for the regular-season finale last year after the receiver went radio silent in the final 48 hours before the game. Brown arrived in a fur coat, hung out for a half and then disappeared from view until well after his teammates had cleaned out their lockers following a 9-6-1 finish that left Pittsburgh on the outside of the playoffs for the first time since 2013.

He then publicly criticized Tomlin and Roethlisberger, eventually forcing his way out in the trade. He then got a new three-year contract worth $50.125 million from Oakland.

"I'm extremely excited to be here," Brown said. "Obviously, it was a challenge. I'm embracing the new. Excited about opportunities to put my condition on display, work on my mentality with learning the plays and take it all in."

Carr has worked hard to build a rapport with Brown and the rest of an almost entirely new receiving group. There are only three wide receivers on the roster who even got a single pass from Carr last season in Marcell Ateman, return specialist Dwayne Harris and Keon Hatcher. Those three combined for only 22 catches last season and don't figure to have a major role on the offense this season.

Instead, Carr's main targets will likely be Brown, big-ticket free agent Tyrell Williams, Ryan Grant, J.J. Nelson and rookie Hunter Renfrow. Carr held many offseason throwing sessions in local parks with some of his new wideouts this offseason and tried to build a rapport off the field as well by hanging out in his free time. That was appreciated by Brown.

"It's tremendously important to have a relationship off the field because playing football you get mentally tired, you get frustrated," he said. "You always want to have that respect for a guy, to know where he is coming from, know what he stands for and know what is important to him, so you guys can be on the same page and do what you desire to do. You desire to win."