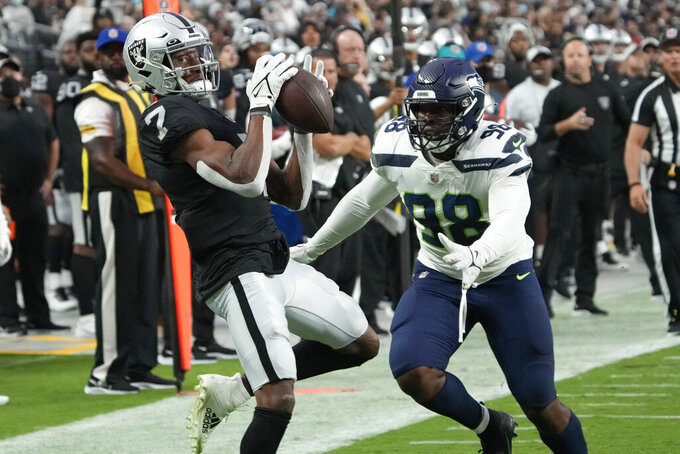 It’s been a message Las Vegas Raiders coach Jon Gruden has been delivering since players first reported to team headquarters for training camp in late July.

“I don’t want anybody to forget Zay Jones,” Gruden warned that day. “I don’t think we have a better-conditioned athlete than Zay Jones.”

Jones certainly appeared to be in top shape during the first quarter of Saturday’s 20-7 preseason victory over the Seattle Seahawks.

Jones was third-string quarterback Nathan Peterman’s main target during the opening stanza, when the two connected three times for 57 yards, including an impressive 28-yard go-route down the sideline, which led to an eventual touchdown during the game’s first drive.

“I would say his ceiling is untapped," Gruden said. “He’s taking advantage of these opportunities. ... “I’m rooting for him, I’m really happy for him because nobody has work harder than him.”

And that's a good thing for him, considering locks to make the roster like Bryan Edwards, Henry Ruggs, and Hunter Renfrow are sitting out preseason games while Gruden and offensive coordinator Greg Olson determine who to keep from a deep receiving corps that also includes Keelan Doss, who has stepped up throughout camp, and Willie Snead, who was signed as a free agent during the offseason.

Jones, who started his career with Peterman in Buffalo, had 14 receptions for 154 yards last season and just one touchdown. He had 20 catches for 147 yards in 12 games with the Raiders in 2019.

Though he should be familiar with the fifth-year pro after Jones played in 26 games for the Raiders over the last two seasons, Gruden said he wanted Jones on the field Saturday for 15 to 20 snaps.

Against Seattle, Peterman targeted 12 players and connected with 11, six of whom were receivers.

“It’s amazing just to kind of see where me and Zay have come in our careers,” Peterman said. “I remember throwing to him in the Senior Bowl, still getting drafted together, and then obviously coming here together — it’s been amazing. I mean he just makes plays. ... He really sparked the whole offense, the whole team.”

While Gruden continues to celebrate the wideout’s infectious personality and energy, saying he brings the type of enthusiasm that makes him feel younger and healthier, Jones said he feeds off the passion of his coach, who turned 58 on Tuesday.

“I generally love who he is as a person and as a coach,” Jones said. “He’s the most consistent person I’ve seen as far as his personality and what he brings to the table every single day. Whether it’s installing plays, whether it’s around the building, he has an infectious personality as well. And he generally loves the game of football, every facet of it. So that means a lot coming from him because I just try to add to what we’re doing.”

Behind Edwards, Ruggs, and Renfrow, the Raiders’ wide receiver room figures to also include veteran John Brown. That leaves one or two spots open, depending on whether the Raiders keep five or six receivers, with Jones, Snead and Doss all in the hunt, and several others on their heels.

It’s the consistency and chemistry Jones has shown with starting quarterback Derek Carr during camp that he’s hoping will add to his allure.