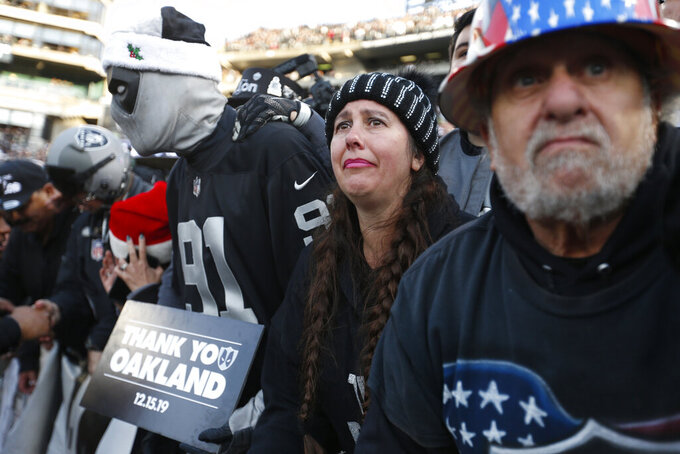 Oakland Raiders fans in "The Black Hole" watch their team walk off the field at the end of an NFL football game against the Jacksonville Jaguars n Oakland, Calif., Sunday, Dec. 15, 2019. (AP Photo/D. Ross Cameron)

None of that will change what was a stunning late-game collapse by the Raiders that provided a bitter finish to a 25-year run in Oakland before next season's move to Las Vegas.

The Raiders (6-8) appeared to be in position to close out the Coliseum with a win when Derek Carr kept the ball on an option and ran for a first down with 2:05 to play. Carr slid before reaching the sideline to give himself up and make sure the clock would keep running.

Instead, the official ruled him out of bounds, forcing the Raiders to run another play before the two-minute warning and giving the Jaguars an additional 40 seconds for a game-winning drive in a 20-16 victory.

Gruden said he got an apology call from NFL officiating chief Al Riveron, but was frustrated nothing could have been done at the time to rectify the mistake after seeing other calls this year get changed in New York.

"Why don't you stop the game and get the clock right? I don't think it was even close," Gruden said. "So, I'm not happy about it. Apologies are great, but this is 2020, we've been in enough meetings and I'm disgusted by it."

Adding to the frustration was the fact that the Raiders got a delay of game penalty in the confusion over the call, then dropped a third-down pass, missed a field goal and then allowed Gardner Minshew to drive the Jaguars down for the winning score.

So instead of giving fans in Oakland one last thing to celebrate before the Raiders leave town, there was only sadness and anger at the end that boiled over into booing of Carr and debris being thrown on the field.

TE Darren Waller. He continues to be one of the only reliable threats in the passing game this season for the Raiders. He had eight catches on 10 targets for 122 yards against the Jaguars, giving him 1,001 yards receiving on the season. Waller joins Todd Christensen as the only Raiders tight ends to reach the 1,000-yard mark. Christensen did it in 1983, '84 and '86, with his 1,247 yards receiving in 1983 the most ever by a Raiders tight end.

Second half offense. For the second straight game, Oakland's offense stalled in the second half, failing to score a single point after halftime. The Raiders have just one TD on 28 second-half drives over the past five weeks, with that one coming in the final minute of a 40-9 loss at Kansas City. Their league-low 1.21 points per drive in the second half this season are their fewest as a team since 2009.

CB Trayvon Mullen. The rookie had his best game yet, providing strong coverage throughout the game. He had a career-best three passes defensed as well as seven tackles, providing a bright spot for the future.

K Daniel Carlson. He missed a 50-yard field goal late in the fourth quarter and then again from 45 yards out after getting a reprieve because of a penalty. Carlson has missed six of 21 field goal tries this season, including five in the past seven games. He ranks 26th among 31 qualified kickers with a 71.4% accuracy rate this season after missing only one kick for Oakland last year.

WR Hunter Renfrow could return from a rib injury this week. ... RB Josh Jacobs was hurting after playing through a shoulder injury and his status going forward remains unknown.

Less than 1 percent. — That's the Raiders chances to make the playoffs, according to The New York Times Upshot playoff simulator. It boils down to this: To qualify for the postseason, Oakland must win twice, hope Pittsburgh and Tennessee both lose twice, Indianapolis wins two of its final three games, Cleveland loses or ties a game and maintain their lead over the Steelers in the strength of victory tiebreaker.

The Raiders travel to Los Angeles to take on the Chargers on Sunday.