Guice and Peterson give Redskins a 1-2 punch in backfield 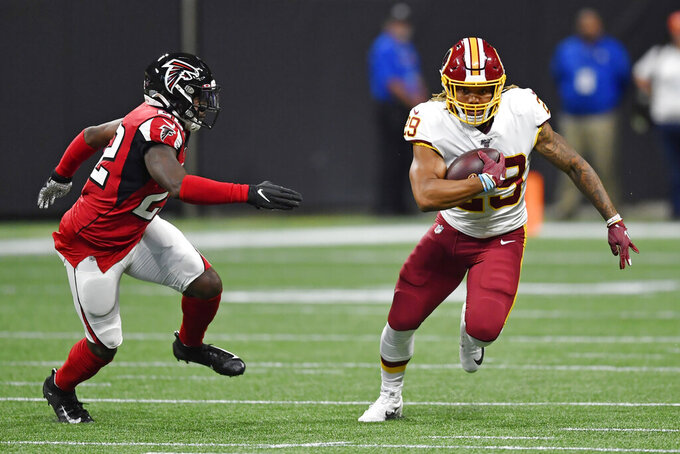 "You're really old school," Guice said. "We got all this Cryotherapy and stuff, and you're talking about bags of ice."

Old school, meet new school in the Washington Redskins' backfield headlined by a 34-year-old climbing the career rushing list and a 22-year-old itching to make his NFL debut 13 months after a torn ACL. That injury opened the door for Peterson's resurgence in Washington, and now he is playing a part in helping Guice supplant him as the Redskins' No. 1 running back.

"I'm not going to knock anyone or not give someone some advice because I'm competing against that person," Peterson said. "I want to see him be the best player he can be. When I see things on the field that I feel like he can do better, I'm on him about it."

Guice sometimes just watches Peterson — how he runs, how he dissects film and even how he takes notes in meetings. Call it an added benefit of Peterson signing a two-year extension with the Redskins.

"Adrian is a future Hall of Famer," Redskins President Bruce Allen said. "A lot of people want to be in the Hall of Fame and are striving for it who are currently playing, but throughout the league everyone knows he's going to have a gold jacket in his future. ... That type of role model is fantastic."

Even third-down back Chris Thompson was "star struck" when Peterson joined the team prior to last season. Within days, Peterson fit right in as one of the guys, but his resume makes him stand out to Guice and many other younger teammates.

"It's like a son watching their father," Guice said. "Obviously he's not our dad, but this is the same thing. We watch everything you do. We're soaking it all up. He doesn't even have to say anything. We just respect him that much."

Peterson might be the perfect mentor for Guice given that he rushed for almost 2,100 yards in 2012 after coming back from a torn ACL in his left knee. He and Thompson have plenty of tips for Guice to bounce back as effectively as possible, be it not rushing back, stretching muscles or feeling confident that he won't tear the ligament again.

"Know that four months out (from surgery), that new ACL is stronger than the other one," Peterson said. "That's something that you can lock into your mind and have that confidence."

Guice doesn't lack for confidence. Slipping to the second round of the 2018 draft and this ordeal taught him he's "really a strong son of a gun."

The LSU product has shown it. Despite just 11 carries in exhibition play because it took time to get physically cleared to play, Guice is listed as the Redskins' starting running back going into Week 1 at Philadelphia.

"We drafted him for a reason," coach Jay Gruden said. "We feel like he can be a first, second and even a third down back, if needed. I think the offense, carries-wise, will probably go through him."

Washington lacks proven offensive playmakers in the passing game, but there's only one ball to go around for Guice, Peterson, Thompson and newly signed running back Wendell Smallwood.

"However the coaches work out the playing time, that's on them," Guice said. "I'm just going to be ready when my name's called."

Guice seeks out Peterson's thoughts after a snap in practice and will gladly take any tips and tricks the veteran can provide about injury recovery. More than anything, he looks at Peterson's own comeback from a torn ACL as something to shoot for and will follow his own lead in trying to replicate it.