Hall of Fame class has something for everybody 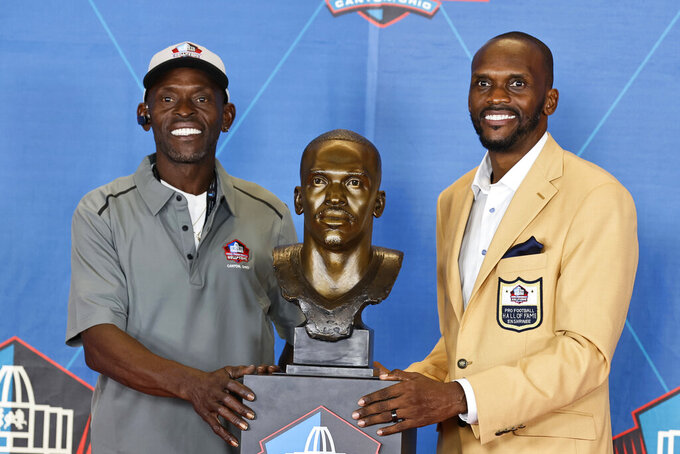 CANTON, Ohio (AP) — From bone-rattling tacklers Troy Polamalu, Steve Atwater and Cliff Harris to hard-charging runner Edgerrin James to the pass-catching brilliance of Isaac Bruce and Harold Carmichael, the Pro Football Hall of Fame class of 2020 has something for everyone.

They all entered the hall Saturday night, a year late due to the COVID-19 pandemic, yet just as rewarding.

“If you told me after I graduated from the University of Michigan that I’d be excited standing in Ohio in the middle of August,” Hutchinson joked, “...to me, there’s no place better than Canton, Ohio.”

Certainly all 12 men enshrined on this night felt that way.

“I am humbled and honored to wear this gold jacket,” Atwater said before looking around at the other Hall of Famers on the stage. “What a group we have up here.”

Polamalu had a 12-season career filled with spectacular performances, leadership and, well, winning with the Steelers. The 16th overall draft pick in 2003 from Southern California, he played in three Super Bowls, winning two, and made the NFL’s 2000s Team of the Decade.

“I love football. It was my entire life as long as I can remember,” said Polamalu, who missed festivities earlier this week after testing positive for COVID-19; he was medically cleared to attend Saturday. The crowd of 18,383 cheered long and loud for him, delaying his speech.

He then talked about the “willingness to push beyond what the brain says is possible for the body. Football challenged me mentally, physically and spiritually. I had to succeed to quench this desire.”

Atwater, who won two Super Bowls with Denver, might have been the most physical defensive back of his era, just as the Cowboys' Harris and Shell might have been in theirs.

Shell was a linebacker at South Carolina State who went undrafted, was shifted to safety in Pittsburgh and became a tackling machine. With veterans on strike in his rookie year of 1974, Shell made such an impression that coach Chuck Noll inserted him as a starting safety. He spent 14 seasons as a fixture for the Steelers.

With hundreds of Terrible Towels waving, Shell recognized Steeler Nation and then said of being an undrafted free agent from South Carolina State, “When facts get in the way of your goal, you must go against the grain to achieve your goal.”

It was a big night for Pittsburgh as Shell, Polamalu and Cowher were enshrined as Steelers, and Covert went to Pitt, where he blocked for Dan Marino.

“What a weekend for the Pittsburgh Steelers,” Cowher said as Terrible Towels waved throughout the stadium. “It is unbelievable to me to go in the Hall of Fame with two guys you drafted: Troy Polamalu and Alan Faneca. Also with Donnie Shell and the late, great Bill Nunn.”

Cowher also paid tribute to “the only head coach I ever worked for,” the late Marty Schottenheimer, predicting “one day you will be in the Hall of Fame.”

Hutchinson was a five-time All-Pro and member of the NFL 2000s All-Decade Team. Along with strong work as a pass protector, he opened holes for rushers who averaged just under 1,400 yards and 14 touchdowns a season.

After joking about potentially being uncomfortable in Hall of Fame Stadium, Hutchinson then told his son not to “fear failure but fear to have not given my all.”

Tagliabue often was passed over for the hall, but his resume as a commissioner is impressive. He was faced with such obstacles as the outbreak of the Gulf War to 9/11 to Hurricane Katrina during his stewardship from 1989-2006. His skills at overcoming those tests, keeping labor peace, guiding the NFL through expansion, significantly increasing revenues and helping pass the Rooney Rule have led to his induction into the Pro Football Hall of Fame as part of the centennial class.

“This is like a dream come true,” Tagliabue said. “The centennial class spans pro football history.”

Carmichael dominated defensive backs with his 6-foot-8, 225-pound size and great hands. The Eagles star from 1971-83 had three 1,000-yard seasons in an era when the passing game was not as prominent as it is today. He averaged a touchdown every 7 1/2 catches and made the NFL 1970s All-Decade Team. Carmichael was the league’s Man of the Year in 1980.

“Whew, Baby,” Carmichael said when his bust was revealed. “I am so, so honored to be a part of this brotherhood, this fraternity, with love. What a journey.”

Bruce recognized his 14 siblings during his speech.

“Coming from the heart tonight,” Bruce said. He then spoke of “the defensive backs that baptized me — and the ones I baptized.”

James had the best line of the night. After opening his gold jacket to note he was “inmate No. 336 in the Hall of Fame,” the man Peyton Manning called “the best teammate I ever played with” concluded with: “My career started with gold teeth and ended with this gold jacket.”

Manning will be enshrined Sunday night along with the other members of the Class of 2021: Charles Woodson, Calvin Johnson, Faneca, John Lynch, Tom Flores, Drew Pearson and Nunn.