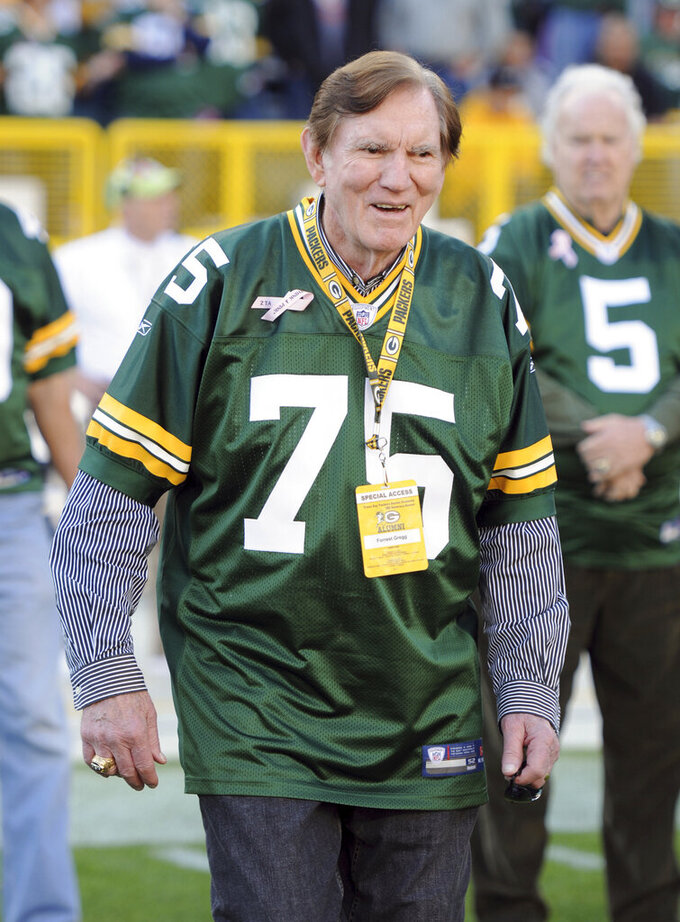 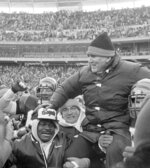 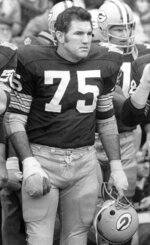 COLORADO SPRINGS, Colo. (AP) — Forrest Gregg was remembered Wednesday as a gentle giant who was as comfortable playing Barbie dolls with his daughter as he was playing football for Vince Lombardi.

Gregg died Friday at age 85 after a long fight with Parkinson's, a disease his neurologist and family believe might have been triggered by the countless concussions he sustained while playing football in the 1950s at SMU and in the NFL from 1956-71.

"Forrest Gregg is one of the giants of the game," Hall of Fame President David Baker said, noting Gregg was one of a handful of players to win six NFL titles in a league that's celebrating its 100th season. The others are his Packers teammates Herb Adderley and Fuzzy Thurston and Patriots quarterback Tom Brady.

Gregg's booming baritone that was reduced to a whisper in his later years reverberated through the First United Methodist Church in Colorado Springs as his Hall of Fame acceptance speech in 1977 was played on two screens above the altar.

After playing 14 seasons in Green Bay, Gregg won one more Super Bowl in 1971 in Dallas. He went on to win 75 games in 11 seasons as a head coach in Cleveland, Cincinnati and Green Bay and he took the Bengals to their first Super Bowl during the 1981 season when they lost 26-21 to Joe Montana and the 49ers.

Bengals owner Mike Brown was among those who attended the funeral for the man Lombardi once called "the finest football player I ever coached."

In an interview with The Associated Press in 2013, Gregg said "the finest bunch of players I was ever around," weren't Lombardi's Packers or Tom Landry's Cowboys but "the courageous kids at SMU." They went just 3-19 from 1989-90 after Gregg was hired at his alma mater to restore integrity to a program that was handed the "death penalty" in the mid-1980s for paying players.

Baker spoke at the funeral, as did Hall of Fame receiver James Lofton, who played for Gregg in Green Bay, and Greg Gardner, who was among two dozen ex-SMU players who stood at one point to sing "Varsity" in a moving moment at the public church service that preceded a private burial.

Lofton said he saw another side of Gregg upon his retirement when Gregg, who was then the athletic director at SMU, invited him to bring his three young children to a basketball game. Afterward, they went up to Gregg's office, "and he bounced my kids on his knee and I'm thinking, where'd this guy come from?"

Gregg's daughter, Karen Gregg Spehar, said her father was every bit the family man that he was the football man.

"At his core, his life was about love," she said.

She shared some of her most poignant memories of her childhood when her father gladly attended her tea parties.

She recalled "a giant smiling man sitting across from me, our pinkie fingers raised just so."

Gregg, who earned the nickname "Iron Man" for playing in a then-record 188 consecutive games during his career, was diagnosed with Parkinson's in October 2011. He quickly embarked on a campaign to raise public awareness about the incurable disease, teaming with the AP to reveal his diagnosis so he could urge others to seek treatment early enough to delay the degenerative effects.

His daughter said after the funeral that the family donated his brain to Boston University's CTE Center, which conducts research on chronic traumatic encephalopathy and other long-term consequences of repetitive brain trauma in athletes and military personnel.

"We decided as a family to donate his brain to Boston University because we are not sure what's going on with his brain as far as either Parkinson's or CTE because of his repetitive concussion syndrome that he experienced in football," Gregg Spehar said. "So we are going to find in eight months to a year really what happened with his brain.

"And we will share that report with anybody who wants to know so that people can learn about what happens in the world of football and also what happens with Parkinson's in the brain," she said. "So, we are hoping that his ultimate gift with be a gift that helps more people."