Healthy Verrett one of few bright spots on 49ers defense 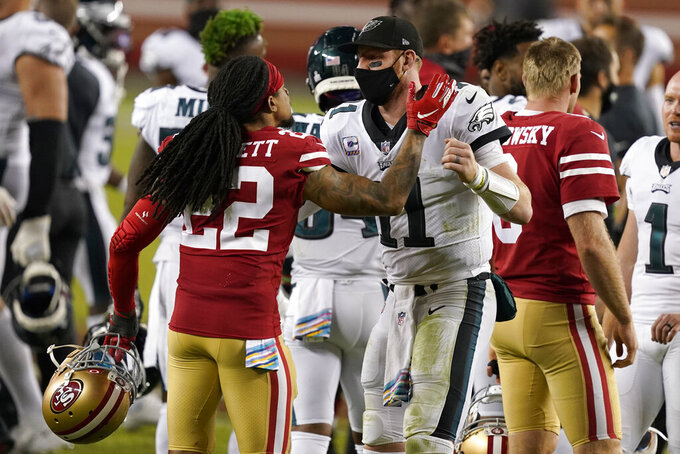 SANTA CLARA, Calif. (AP) — The San Francisco 49ers have been so decimated by injuries at cornerback that they have been forced to start a different duo outside in every game this season.

The one surprise has been that the most reliable option so far in the secondary has been Jason Verrett.

While players like Richard Sherman, Emmanuel Moseley, Ahkello Witherspoon and Dontae Johnson have been sidelined by injuries, it has been the oft-injured Verrett who has played the most at cornerback for San Francisco after ending his season on injured reserve in five of his first six years in the NFL.

“He’s gotten better every single day,” defensive coordinator Robert Saleh said Thursday. “He’s got such a great mindset to him. There’s a reason why he was a (Pro Bowler) in his earlier years before all the injury luck hit him, but his film study, his practice habits, his attention to detail, all of it is fantastic.”

Verrett is slated to make his fourth straight start of the season, a feat he had only accomplished previously in 2015-16.

Verrett’s injury history is a long one since he entered the league as a first-round pick by the Chargers in 2014. He missed eight games with a torn labrum as a rookie, tore his ACL four games into the 2016 season, went down with a season-ending knee injury in the 2017 opener and then tore his Achilles tendon on the first day of training camp in 2018.

He left the Chargers after that season and signed with the 49ers last season, when he played just four snaps before going on season-ending injured reserve with an ankle injury.

Verrett kept getting chances because the one year he was healthy in 2015 he had three interceptions, 12 passes defensed and made the Pro Bowl.

By the time he got the start for San Francisco in Week 3, he had played in only 26 of the 98 games he was eligible for since entering the league. That’s one reason his teammates were so happy to see him back on the field.

“They’ve seen what it was like for me on my worst days,” Verrett said. “They’ve seen me on the sideline while they were on the road to the Super Bowl. It was definitely bittersweet for me watching that. Happy for them, but bittersweet just because of the competitor that I am, always wanting to be out on the field and flying around with those guys.”

Even a healthy Verrett hasn’t been enough to overcome the problems in the secondary that reached a breaking point last week. Sherman, Moseley, Johnson and slot cornerback K’Waun Williams were out and Witherspoon was only supposed to play in an emergency because of a hamstring injury.

Miami quarterback Ryan Fitzpatrick picked on former practice squad player Brian Allen from the start, completing five passes for 124 yards and drawing two penalties before the Niners finally made a change when Allen was beaten for a touchdown on the fourth drive.

Witherspoon came in after that and made it through the game healthy. Now San Francisco should have Witherspoon, Moseley and Verrett available for Sunday night’s game against the Rams, while Sherman still tries to work his way back from injured reserve with a calf injury.

Saleh believes that will help his defense get back to form after allowing 43 points in last week’s loss to the Dolphins.

“Every once in a while even the greatest ones get punched in the mouth, and I still believe that this is a top 10 defensive unit,” Saleh said. “Top five if we’re on our stuff and it doesn’t change on who’s on the football field. We’re a fantastic group. It’s got a fantastic mindset and one game doesn’t define what I think is an unbelievable defensive unit.”