Herbert, James excel in Chargers' scrimmage in front of fans 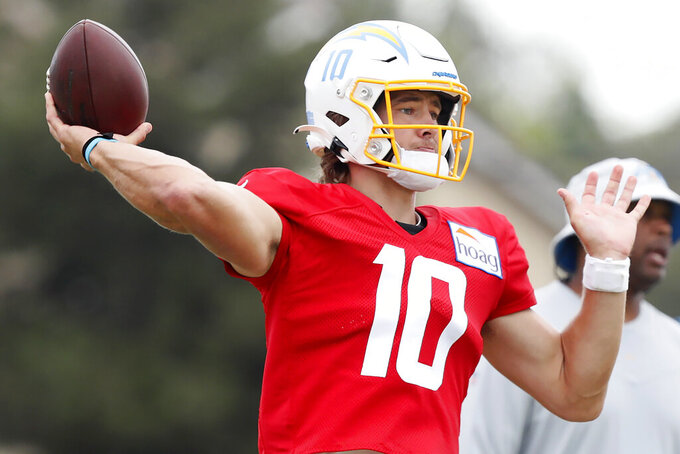 INGLEWOOD, Calif. (AP) — Los Angeles Chargers fans got to see a little bit of everything during their first opportunity to view a practice at SoFi Stadium.

The Maine and The Offspring performed during a pregame concert, new coach Brandon Staley got his first time to go through a game routine, and Derwin James and Justin Herbert made big plays.

“I’m so glad that we did this because this is so much different than a training camp practice. I think that adjustment is real,” Staley said. “I’m glad our operation got going here, and I think that you saw the guys performed well today in front of our fans.”

Herbert had a solid day in front of nearly 34,000 fans as he continues to get up to speed with Joe Lombardi’s offense. The second-year quarterback often connected with new tight end Jared Cook and also had a 70-yard touchdown to Jalen Guyton. He also had TD passes to Cook, Mike Williams and Keenan Allen.

Josh Palmer, a third-round pick this year, also got plenty of snaps with the first unit.

Last year, the Chargers moved into SoFi Stadium, but fans were not allowed due to the coronavirus pandemic. Herbert said it was good to get out and run some game situations before the preseason games begin on Saturday against the Los Angeles Rams.

“We had some good opportunities to go down and score. There were some good things, some bad things, but a lot of film to watch,” Herbert said.

James missed last year due to an injury and made the most of his first opportunity to play in front of the home fans. He picked off Herbert near the sideline on a pass intended for Austin Ekeler.

“It felt good to get out here and put on the uniform. There are still a lot of little things to clean up. There’s still a lot of moving parts,” he said.

Linebacker Kenneth Murray (ankle) and center Corey Linsley (foot) left with injuries, but Staley said not having both players return was more precautionary.

The other thing that Staley wasn’t pleased about was the performance of his kickers. Incumbent Michael Badgley — who didn’t make a field goal beyond 45 yards last season — missed three of seven during one period, including 49- and 51-yard attempts.

Tristan Vizcaino was 3 of 6, and rookie free agent Alex Kessman 2 of 6.

“The good news is we have three more games to evaluate against other people,” Staley said.