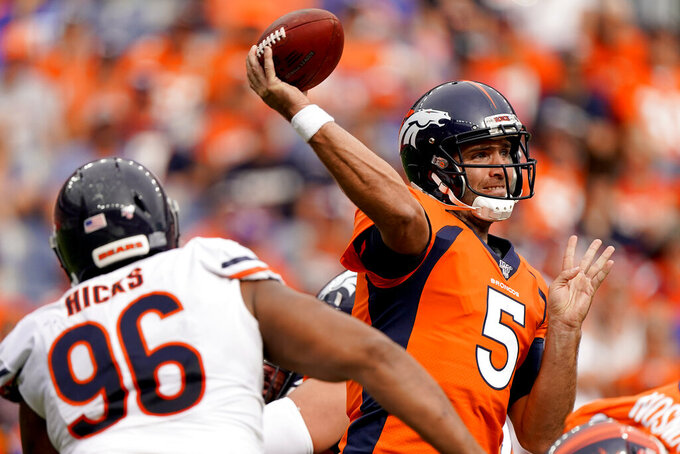 That task could be even tougher if Akiem Hicks isn't available to dominate up front.

Coach Matt Nagy said the Pro Bowl defensive tackle probably will be a game-time decision for an important matchup with the Vikings after he left Monday's win at Washington because of a knee injury.

"We just gotta see exactly where he's at and I think he's truly probably going to end up being a game-time decision," Nagy said Thursday.

Hicks left in the fourth quarter against Washington. He has started all 51 games since joining Chicago in 2016. He has not missed a start since 2015 or a game since 2014.

Nagy described the injury earlier this week as a "wear-and-tear type thing" that he didn't think was serious. But Hicks' absence would be a big hit for a team trying to avoid an 0-2 start at home.

Chicago (2-1) opened the NFL's 100th season with a loss to Green Bay at Soldier Field, squeezed out a win at Denver on Eddy Pineiro's last-second field goal before dominating the winless Redskins. Losing at home to another division rival would put the Bears in a big hole as they try to repeat as NFC North champions.

Without Hicks, containing the Vikings' running game becomes an even more difficult task. While Cook leads the NFL with 375 yards, rookie Alexander Mattison has 132 and is averaging 5.3 yards per attempt.

"Akiem is a bully on the field," linebacker Roy Robertson-Harris said.

Hicks had his way with center Pat Elflein — now playing guard — in a 25-20 victory at Soldier Field last season. He had a sack, two quarterback hits and helped Chicago hold Minnesota to 22 yards rushing, with Cook managing just 12 on nine attempts. Hicks also had 1½ sacks in a Week 17 win at Minnesota that kept the Vikings out of the playoffs.

"Akiem's one of our leaders," Ha Ha Clinton-Dix said. "He's one of the biggest leaders on our team. We just need one of our young guys to step up (if Hicks is unavailable). We have depth on this defense. We have great leaders at the 2s and 3s that could be 1s with any other team. And now we'll know if any of those guys are ready to take his position and make plays."

Hicks isn't the only banged-up Bear.

Pineiro remains limited by a right knee injury. He went from booting the winning 53-yard field goal at Denver to hobbling through the game at Washington after he got hurt lifting weights on Friday.

Pineiro hit 1 of 2 field goals and made all four extra points. But the Bears had Pat O'Donnell handle kickoffs in his place.

"Pregame, we knew there might be a little bit of pain but he was going to be fine," said special teams coordinator Chris Tabor, who expects Pineiro to play on Sunday. "And he hit the ball really well. His only miss on the whole night was actually the miss in the game. Other than that, pregame he made everything. So I was really pleased with how he approached it and we just watched and wanted to be smart, obviously, of where we were going to hit it from."