High-scoring Titans getting contributions across roster 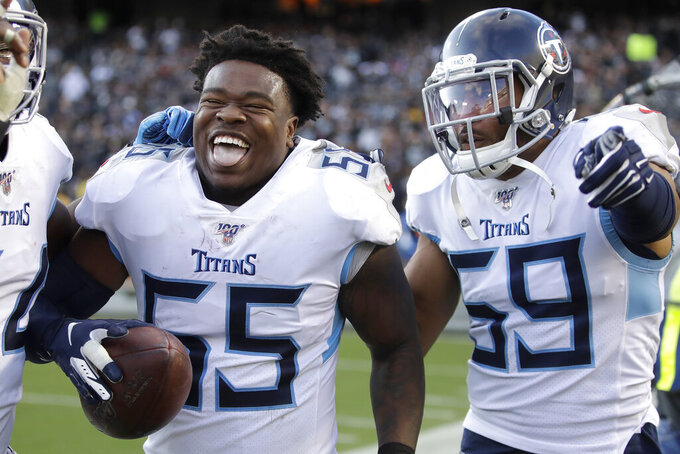 Tennessee Titans inside linebacker Jayon Brown (55) celebrates with inside linebacker Wesley Woodyard (59) after scoring against the Oakland Raiders during the second half of an NFL football game in Oakland, Calif., Sunday, Dec. 8, 2019. (AP Photo/Ben Margot)

NASHVILLE, Tenn. (AP) — Ryan Tannehill has done exactly what the Tennessee Titans hoped he would when they made him their starting quarterback.

They have scored at least 30 points in four straight games, the franchise's longest streak since 2003. And though the Titans are coming off a game where they averaged more yards per play than any other NFL game this season, they still see plenty of room for improvement.

Some might say they're nitpicking, but the Titans (8-5) are working to fix those mistakes — which concern Tannehill.

“The same mistake next game could hurt us," he said, “so we definitely want to clean those things up."

Only the Baltimore Ravens (35.1) have scored more points in the NFL over the past eight weeks than the Titans — who are averaging 31.4 points per game in that span. All the scoring has helped Tennessee win four straight and six of its last seven and turn Sunday's game with Houston (8-5) into a showdown for the top of the AFC South.

Everyone on the Titans' roster is getting into the scoring act too.

The defense has scored a touchdown three times this season, the last with linebacker Jayon Brown picking up a fumble and running 46 yards for the clinching TD in last week's 42-21 victory in Oakland. Linebacker Rashaan Evans returned a fumble Nov. 10 in a win over Kansas City.

Brown returned a fumble forced by Tye Smith, who returned a blocked field goal for a touchdown in a win in Indianapolis on Dec. 1.

“We're all feeding off each other,” Brown said. “Special teams is feeding off defense, and the defense is feeding off the offense. It's just real good to see all three phases clicking right now. We're just playing real good complementary football, and it's working for us.”

Scoring on defense started in the opener with cornerback Malcolm Butler returning an interception for a touchdown.

The biggest difference for Tennessee in this scoring outburst in recent weeks has been due to the offense. The Titans had scored only one touchdown in 10 quarters when Tennessee benched Marcus Mariota for Tannehill looking for an offensive spark.

The difference in the offense was immediate.

Now the Titans have scored 27 touchdowns in seven games with Tannehill. They've scored no less than 31 points in any of their past four games and in two of the last three.

“I don't think it's like a secret formula or anything like that," Titans safety Kevin Byard said. “I think guys are just executing a lot better than they were before."

Tannehill not only is second in the NFL completing 73.4% of his passes, he leads the league with a 118.5 passer rating. Derrick Henry ranks second with 1,243 yards rushing, and he's averaging 5 yards a carry to give Tennessee a serious threat on play-action. Rookie wide receiver A.J. Brown leads the team with 39 catches for 779 yards and six touchdown catches.

Trying to slow down or stop the Titans has kept the Texans' coaching staff busy the past couple days. Houston coach Bill O'Brien says the Titans are doing a great job with the offense and the design with Tannehill executing.

Along with the rest of the Titans.