His Cause: NFL broadcaster's shoes will show damaged brain 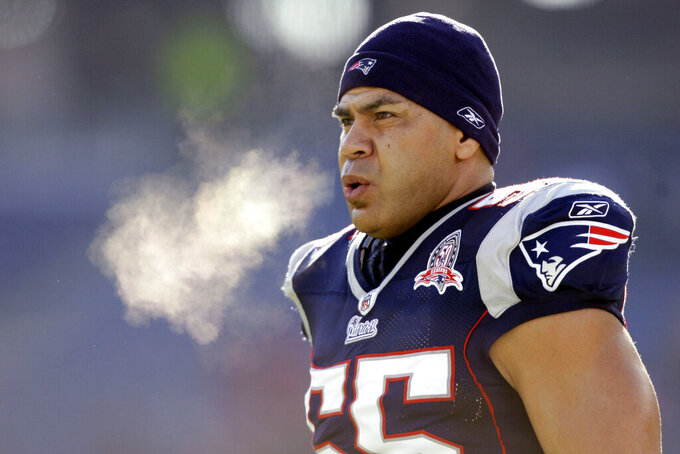 FILE - New England Patriots linebacker Junior Seau (55) warms up on the field on Jan. 10, 2010, before an NFL wild-card playoff football game in Foxborough, Mass. NFL player turned broadcaster Ross Tucker will wear shoes showing an image of a traumatized brain and a portrait of Seau to raise money for the families of players who suffered from chronic traumatic encephalopathy. (AP Photo/Charles Krupa, File)

BOSTON (AP) — NFL player turned broadcaster Ross Tucker will wear shoes showing an image of a traumatized brain to raise money for the families of players who suffered from chronic traumatic encephalopathy.

As part of the NFL’s “My Cause My Cleats” initiative, Tucker designed the shoes that picture Hall of Fame linebacker Junior Seau and offensive lineman Tom McHale, who were both diagnosed with the degenerative brain disease linked to concussions and repeated head trauma.

The shoes say “End CTE” on the side, and on the toe is an image of McHale’s brain showing the decay caused by the disease. They will be auctioned off to raise money for the Concussion Legacy Foundation, which funds research into CTE and supports families of those afflicted with the disease.

An offensive lineman who spent parts of five seasons in the NFL, Tucker said he will wear the shoes during the pregame radio show on Westwood One when the New York Jets play the Philadelphia Eagles on Sunday.

“I vividly remember playing against Junior Seau in 2003 and specifically remember a couple of collisions with Junior in that game,” Tucker said. “Now that I know what they can do to a football player’s brain and how CTE can impact a family, I’m committed to doing my part to help the Concussion Legacy Foundation team learn how to diagnose and treat this terrible disease.”

McHale, who played nine seasons with the Buccaneers, Eagles and Dolphins, died in 2008 at the age of 45 and was one of the first former NFL players to be diagnosed with CTE.

Seau played 21 years with the Chargers, Dolphins and Patriots. He died in 2012 of a gunshot wound to the chest and was also found to have suffered from CTE, which can only be diagnosed posthumously.