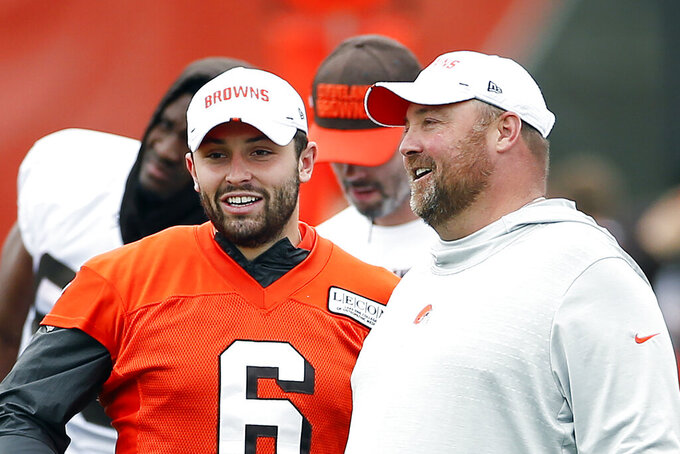 MAYFIELD VILLAGE, Ohio (AP) — Baker Mayfield has a new teammate. She rocks a headband, too.

The Browns' charismatic quarterback has entered a marketing partnership with Progressive and will star alongside his wife, Emily Wilkinson, in a national advertising campaign for the insurance giant. The ad shows the couple as new homeowners inside a football stadium.

The "At Home with Baker Mayfield" TV commercials are scheduled to debut on Sept. 5, three days before the Browns play their season opener against the Tennessee Titans, and run through the NFL season.

Mayfield has become one of the league's rising young stars after breaking the rookie touchdown pass record in 2018. He's quickly adding to his business portfolio while reviving a Cleveland football franchise that didn't win a single game the season before he arrived.

Progressive is known for its innovative ads featuring Flo, the frisky, headband-and-apron wearing character who has become a brand icon.

"I was drawn to Progressive because it's a high-energy, winning team," said Mayfield, who walked on at Texas Tech and Oklahoma before becoming a Heisman Trophy winner and No. 1 overall pick. "They thrive on accomplishing what's never been done before and what others say can't be done. My life story and process have been different from others, so I felt right at home with Progressive because their journey has been a little different, as well.

"Emily and I both feel like it's OK to be unique, prove doubters wrong, and be proud of it. We think it'll be fun for people to tune in throughout the season to see how the whole story unfolds."

Mayfield got married this summer before training camp, and the light-hearted, 30-second ads with Emily will feature the newlyweds dealing with typical domestic issues — mowing the grass , plumbing and electrical problems — at their abnormally large "home."

"From our first meeting with Baker months ago, we saw something special with him and set out to showcase his story, and our brand, in a different light," said Jeff Charney, Progressive's chief marketing officer. "To that end, we tossed out the typical 'athlete-as-spokesperson' model and took a more modern, content-rich and episodic approach that's characteristic of today's network shows. There's no glorified pro-athlete persona or hard-sell messaging, just highly relatable, everyday moments between Baker, Emily . and their rather unique 68,000-seat 'stadium home.'"

Progressive, which was founded in 1937, is based in Mayfield Village, Ohio — no relation — and the company's employees will welcome Mayfield and his wife on Wednesday to kick off the campaign.