Houston RB Miller out for season with knee injury 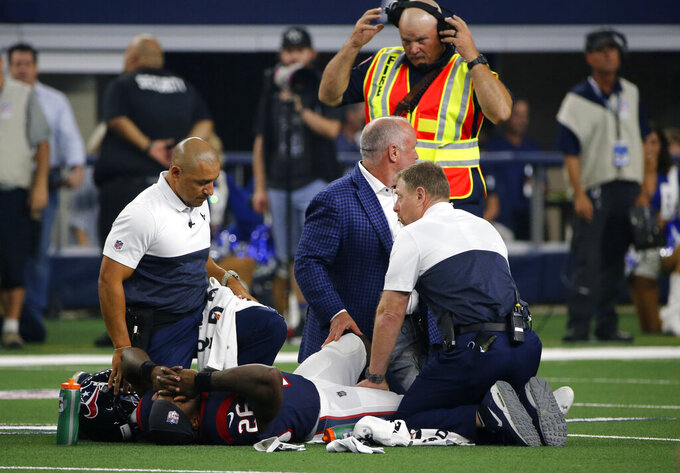 Houston Texans staff check on running back Lamar Miller (26) after he suffered an unknown injury in the first half of a preseason NFL football game against the Dallas Cowboys in Arlington, Texas, Saturday, Aug. 24, 2019. (AP Photo/Michael Ainsworth)

HOUSTON (AP) — Lamar Miller has been placed on the injured reserve after the Houston Texans running back tore the anterior cruciate ligament in his left knee in a preseason game last weekend.

Appearing in his first game this season, Miller was injured on his first carry on Saturday night against Dallas when defensive tackle Maliek Collins slammed into his left leg.

Miller, who has been Houston's featured back for the past three seasons, led the Texans with 210 carries for 973 yards last year. The eighth-year player joined the Texans after spending his first four NFL seasons with the Dolphins.

His injury is a blow to an offense looking to make strides in its third year with quarterback Deshaun Watson. With Miller out for the season, the Texans will look to Duke Johnson to pick up the slack. Johnson joined the team earlier this month in a trade with Cleveland after backup D'Onta Foreman was released.

The 25-year-old Johnson appeared in each game in his four seasons with the Browns, starting 10 of them. Johnson, whose career high in yards rushing is 379, is also a threat out of the backfield and has caught 235 passes for 2,170 yards in his career.