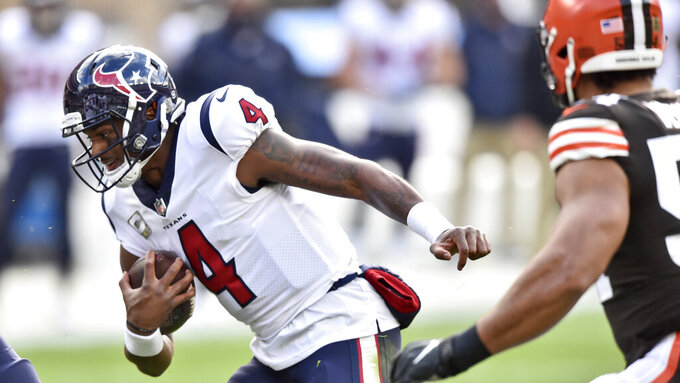 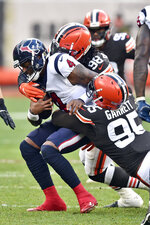 The Houston Texans have struggled to run the ball all season long. Gusty winds during Sunday’s game at Cleveland made it nearly impossible to throw it.

Together, that led to Houston’s worst offensive performance of the season.

The Texans finished with season lows of 153 yards passing and 243 total yards in their 10-7 loss to the Browns.

The start of the game was delayed 36 minutes because of a severe thunderstorm. The rain had mostly stopped by kickoff, but heavy winds whipped through the stadium from start to finish.

Deshaun Watson, who entered Sunday averaging 280.8 yards passing, acknowledged that the weather conditions made things difficult on him. He added that it was especially challenging because he plays most of his games in domes, leaving him without experience passing in heavy winds.

“It’s definitely a factor in the game,” he said. “But I don’t want to sit here and make excuses on that’s the reason why we didn’t capitalize. That’s not the reason. We had opportunities. We just didn’t, we didn’t make enough plays fast enough to be able to try to give us a chance to win.”

One of the biggest missed opportunities occurred early in the second quarter when the Texans were down 3-0 and went for it on fourth-and-2 from the 2. Watson kept the ball and tried to scramble for the score but was met by Myles Garrett for a loss of 2 yards.

The Texans (2-7) had another chance to put points on the board when they lined up for a field goal from the Cleveland 30 in the second quarter. But instead of attempting the field goal, interim coach Romeo Crennel called a fake and they punted instead, and it was downed at the 4.

Crennel made that move because he thought kicking a field goal into the wind would be too difficult.

“In a game like today, when the weather is a factor and you can have great field position, you can play for field position and that can help,” he said.

Crennel agreed with Watson that the wind hurt Houston’s passing game. He pointed to examples of throws that were off target in the third quarter when Watson had the wind at his back.

“We had a couple of downfield passes that guys were open, but the wind carried the ball and so it was an overthrow, or it moved it off track,” he said. “So those are plays that would have changed field position, might have put points on the board that we didn’t hit.”

Houston’s continued running woes didn’t make things any easier for Watson and company. The Texans entered the game ranked 31st in the NFL with an average of 87.6 yards rushing per game.

They ran for 90 against the Browns. Duke Johnson had just 54 yards rushing in his first start of the season with David Johnson out with a concussion. Watson added 36 yards on the ground.

The Texans avoided being shut out when tight end Pharaoh Brown scored his NFL first touchdown on a 16-yard pass from Watson with about five minutes left.

As bad as the Texans played offensively, they were in the game at the very end. But their run defense, which ranks last in the NFL, failed to get a stop after Houston pulled within three.

The Browns were facing third-and-3 with just over a minute left when Nick Chubb broke a 59-yard run. He could have scored on the play but stepped out of bounds to allow Cleveland to run out the clock and secure the victory.

Houston allowed just 62 yards rushing before halftime. But it gave up 169 yards after the break on a day when both Chubb and Kareem Hunt rushed for more than 100 yards.

Crennel, a former defensive coordinator, is disappointed that his defense has been unable to play well against the run for an entire game.

“That’s part of consistency,” he said. “If you’re a consistent team guys do what they’re supposed to do all the time, the majority of the time. And we didn’t do that.”

By Teresa M. Walker 41 minutes ago
By Steve Megargee 7 hrs ago
By David Brandt 8 hrs ago
By Mark Anderson 9 hrs ago
By Joe Reedy 10 hrs ago