Inconsistent Jaguars 'not going to panic' after another dud 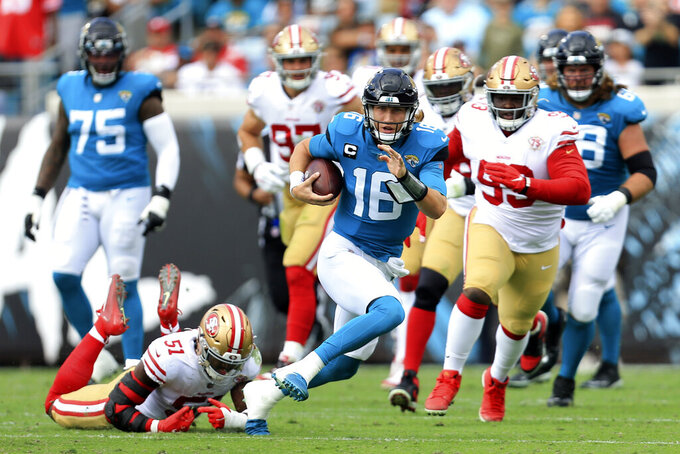 Regardless, it’s a problem for the Jaguars.

Jacksonville delivered one of its biggest duds of the season in a 30-10 home loss to San Francisco on Sunday.

The offense mustered a measly 200 yards on a season-low 44 plays and didn’t find the end zone until 3:04 remaining. The defense allowed three touchdowns and two field goals in the 49ers’ first five drives, including a tone-setting, 20-play drive to open the game that took more than 13 minutes.

“I’m not going to panic,” Meyer said. “That was a very poor display of football in so many areas.”

It was similar to a season-opening loss at Houston and another lopsided loss at Seattle following the team's bye week.

Rookie Trevor Lawrence’s progress has been slowed to a crawl, and he might even be regressing. He completed 16 of 25 passes for 158 yards, with no touchdowns and no interceptions. He was sacked three times.

James Robinson ran 12 times for 29 yards and a touchdown.

Leading receiver Dan Arnold didn’t get a target, and the team’s most dynamic player, receiver/returner Jamal Agnew, injured his right hip in the fourth quarter and did not return.

No one expected much from Jacksonville this season. The team was 1-15 last year, has whiffed numerous times on first-round picks in recent years, has a rookie quarterback, a first-year NFL head coach and spent frugally in free agency.

But the Jaguars had started to gain momentum with a stunning victory against Buffalo at home and a failed comeback attempt last week at Indianapolis. And then they responded with this.

“It hurts,” Meyer said. “I think we won two out of three at one point. So you started feeling good. You got victory meals. People starting to get a pep in their step around here a little bit. Defense was one of the top defenses in the last four games. You kind of feel a little juice going, and then you play like that. We’ve got to get them back. That’s my job, that’s our staff’s job and our leaders’ job. That was a sting to it, but we’ll be back.”

One major problem: The Jaguars have looked lost offensively. They have four touchdowns in the last four games, and two of those came in the waning minutes.

“You just need a spark,” Lawrence said. “You need guys to make plays. It’s all of us. It’s me. It’s receivers, running backs, wideouts. It’s just everybody. Someone make a play, get some momentum, and we just didn’t. We didn’t make any big plays today, so we’ve got to be better.

“We could have used a few sparks. You saw we were starting to do that as the year went on, and the past few games offensively haven’t been great, so we’ve got to find that again.”