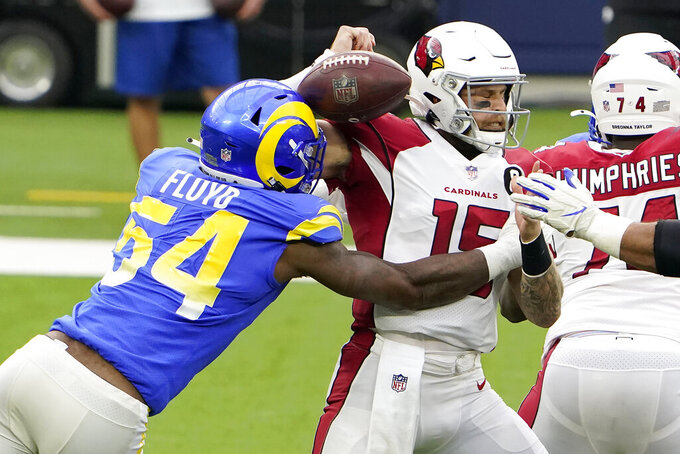 Arizona Cardinals quarterback Chris Streveler (15) fumbles the ball as he is hit by Los Angeles Rams outside linebacker Leonard Floyd (54) during the first half of an NFL football game in Inglewood, Calif., Sunday, Jan. 3, 2021. The Cardinals recovered the ball. (AP Photo/Jae C. Hong)

INGLEWOOD, Calif. (AP) — Kyler Murray's injured right ankle was the least of his concerns after the Arizona Cardinals' postseason hopes were dashed with an 18-7 loss to the Los Angeles Rams on Sunday.

Murray's disappointment at not being able to get a late-season win stung more.

“Right now it doesn’t matter how it feels. I don’t have anything to look forward to as far as moving around on it. I’ll be fine,” Murray said about the ankle after the game.

Murray's status going into Sunday was in doubt earlier in the week after he suffered a right leg injury in last week's loss to San Francisco. He was a full participant during practice leading up to the game though.

But on a third-and-12 from the Rams 49 on the first series, Los Angeles defensive end Morgan Fox landed on Murray's ankle while being sacked. Murray limped off the field and went into the medical tent before going into the locker room.

By the time he came back into the game early in the fourth quarter, the Cardinals were trailing 18-7. Murray completed his first five passes when he returned — including throws of 26 yards to Trent Sherfield and Dan Arnold for 25 yards — to get them into the red zone.

Arizona got as far as the Rams 7 but Murray had a 4-yard loss on a read option and then was sacked for a loss of 8 before Mike Nugent's 37-yard field-goal attempt was blocked.

Coach Kliff Kingsbury said it Murray's call on going back into the game.

“He needed to loosen it up. He couldn’t push off on it,” he said. “He felt like (the pain) was bearable when he came back in. I'm proud of him. It was gutty, especially a guy who uses his legs like that.”

Murray, who completed 8 of 11 passes for 87 yards, added it was more of a matter of loosening up the ankle and making sure the pain-killing injections had done their job before he was able to feel fine.

Chris Streveler came on and led the Cardinals to a touchdown on his first drive, but was ineffective after that. Streveler, who had never thrown a pass in an NFL game, had a short field after Jordan Hicks intercepted John Wolford’s pass at the Rams 20 and returned it 6 yards.

Streveler completed both of his passes on the drive, including an 11-yard touchdown to Jonathan Ward to give the Cardinals a 7-0 lead with 10:09 remaining in the first quarter.

The Cardinals though were hardly able to move the ball in Streveler's other drives. Besides going three-and-out on three drives, Arizona mistakes led to nine points by the Rams defense in the second quarter. Left guard Justin Pugh was called for holding in the end zone to cut the Cardinals' lead to 7-5.

Troy Hill then intercepted Streveler's pass intended for Sherfield and returned it 84 yards for a pick-6 to give the Rams a 12-7 lead at halftime.

Streveler said he thought a hard count had caused the Rams to jump offside, but it wasn't called.

Kingsbury said there wasn't any thought of having Brett Hundley — who has nine NFL starts — active for the game instead of Streveler.

Arizona finishes the season 8-8, which is a three-win improvement from last year. But the Cardinals won only two of their final seven games after they beat Buffalo on the 43-yard "Hail Murray" to DeAndre Hopkins on the last play of the game.

Four of the Cardinals' final five losses were to NFC West foes, including two to the Rams.

“It goes back to the games you are supposed to win. I know we are a playoff team but we hurt ourselves and we held ourselves back,” Murray said. “I think part of it is going through it and learning how to win. We have to be better in all phases. I hope this motivates us an organization. It’s an ugly feeling.”