Isner returns to scene of 1st Masters 1000 title in Miami 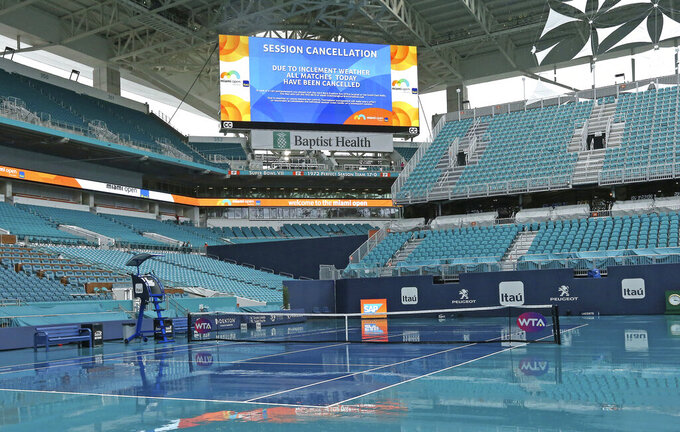 MIAMI GARDENS, Fla. (AP) — When John Isner first got to town for his Miami Open title defense, he went for a practice session at the old tournament site in Key Biscayne instead of the new location at the stadium used by the NFL's Dolphins.

It wasn't that he wasn't sure where to go, of course. Nor was he trying to soak up the good vibes at the place where he won an ATP Masters 1000 trophy for the first time.

"It was just about convenience. Close to my hotel. I just wanted to break a sweat and went out there. It was pretty weird, actually. Kind of quiet. The place still has its allure to it, but it definitely seems different," Isner said Tuesday. "We're all used to pulling into that parking lot and the place is bustling. Wasn't like that."

There wasn't much bustle at the new-look Miami Open on the initial day of scheduled main-draw play, which was completely wiped out because of rain throughout Tuesday.

They'll try again to get started Wednesday; No. 9 Isner and other seeded men such as Novak Djokovic and Roger Federer won't play before Friday thanks to first-round byes.

Isner, 10-6 this season, arrived at the hard-court tournament in 2018 with a 1-6 mark. He proceeded to win six matches in a row, three against men ranked in the top six.

"I do know that, look, odds are, I probably won't defend this title," he said with a chuckle after touring the Humane Society of Greater Miami with Alexander Zverev, the runner-up at the Miami Open a year ago. "At the same time, it is cool coming back as the defending champion of a tournament of this magnitude. Never been in this situation before. Just looking forward to it. No pressure. I don't look at it as, 'Oh, I'm going to lose a bunch of points.' You can't look at it like that. It's just another tournament you want to do well in."

Isner says his performance in Florida gave him a boost that helped him later in the season, including his semifinal showing at Wimbledon in July, the best he'd ever done at a Grand Slam tournament.

So did that carry over into this season, too?

"Unfortunately, I feel like it has a shelf life," said Isner, who lost to Reilly Opelka in an all-American matchup in the first round of the Australian Open in January. "Every player is different, but I feel like, for me, when you start the new year, everything is reset. Even if you played fantastic at the end of the year last year, you have two months off, and everything resets."