It's worst vs worst when Dolphins try to run against Bengals 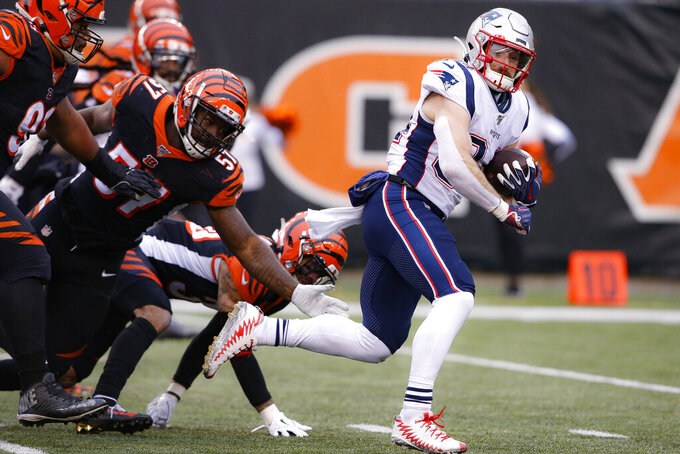 New England Patriots running back Rex Burkhead (34) breaks away from Cincinnati Bengals linebacker Germaine Pratt (57) and runs in for a touchdown in the second half of an NFL football game, Sunday, Dec. 15, 2019, in Cincinnati. (AP Photo/Gary Landers)

MIAMI (AP) — The woebegone Cincinnati Bengals face a challenge Sunday they might be able to tackle: the Miami Dolphins’ running backs.

Cincinnati's run defense is allowing 158 yards per game to rank last in the NFL. But then the Dolphins rank last in run offense, and their leading rusher is a 37-year-old quarterback, Ryan Fitzpatrick, with 219 yards. He ranks 68th in the league.

The Dolphins could become the first team whose top rusher totals fewer than 300 yards since the NFL went to a 16-game season in 1978, according to Sportradar.

And no wonder the Bengals are 1-13. They've allowed more than 5.4 yards per attempt in six games, including each of the past two weeks.

That's one reason the Dolphins are favored for the first time this season. Rookie coach Brian Flores, anxious to establish a winning culture, said he's going all-out for a victory even though it would eliminate Miami from contention for the No. 1 draft choice. Cincinnati clinches the top pick with a loss.

The Dolphins have started four running backs this year, and they've combined to rush for 640 yards while averaging 2.9 per carry. Only one — undrafted rookie Patrick Laird — is still with the team.

“We’ll keep working on it, and hopefully block it better, run better and break more tackles,” Flores said. "We talk about it every week. I would say it was a little bit better last week, and hopefully we see some more improvement this week and in the future.”

An unsettled offensive line is a big part of the problem. At right guard, for example, Miami has changed the starter seven times.

“The offensive line, we have to come up with plays, man,” center and captain Daniel Kilgore said. "It’s the same story every week. That’s not just pointing fingers; that’s just me and everyone else involved.”

The Bengals are on the verge of clinching the No. 1 pick, which would be their first since 2003, when they took quarterback Carson Palmer. Although players and coaches are aware of where things stand, coach Zac Taylor hasn't addressed it with them.

"You have a sense of the things that are going on outside the building that you need to address with the players," Taylor said. "That's not something we talk about. They do a great job. They're focused on coming back and winning the game."

A LOT OF JOE

The Bengals decided to emphasize the run game the past two weeks, and Joe Mixon has put together the two best back-to-back games of his career. He ran for a season-high 146 in a loss to Cleveland and for 136 in the loss to New England last week, carrying it 48 times in all. He also had six catches for 60 yards in the two games combined.

He'll be the focal point in Miami again.

"I mean, why not?" Mixon said. “I feel like I want to set the tone for what kind of game it's going to be and let people know that it ain't sweet.”

Linebacker Calvin Munson, signed this week off the New England Patriots' practice squad, has a chance to become the 81st player used by the Dolphins this year. They've already set an NFL record.

“Guys that come in are getting a chance to play, and some have stepped up,” Fitzpatrick said. “Some haven’t.”

The revolving door has spun fastest in the defensive backfield, where Miami has signed or parted with nine players just this month.

“I look back sometimes in our secondary, and I’m still learning the names,” defensive end Vince Biegel said.

Josh Rosen, considered a potential franchise quarterback when the Dolphins traded for him in April, has taken three snaps since Week 6. Flores has been second-guessed for sticking with Fitzpatrick rather than giving the 22-year-old Rosen a chance to develop.

When asked if Rosen has a future with the Dolphins, Flores eventually said yes.

“Yeah, I do,” the coach said. "We’ll see where it goes. But right now, for this team and this week, we’re going to play Fitz.”