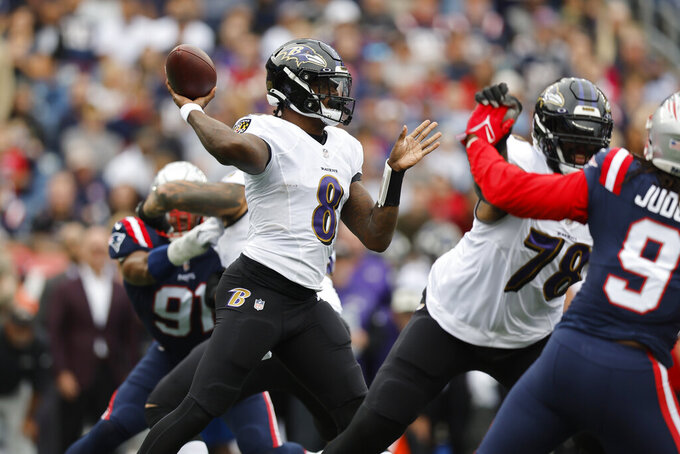 Lamar Jackson was drafted at the very end of the first round in 2018. Josh Allen was taken higher, but of all the quarterbacks selected that year, he may have been considered the biggest risk.

The doubters are a lot quieter now.

“I think it’s as simple as we’re doing what’s asked of us,” Allen said. “There were a lot of different notions and opinions about both of us coming out of the draft. We’re just trying to find ways to help our team win football games. And, he does it as good as anybody in the league.”

When Allen and the Buffalo Bills face Jackson and the Ravens on Sunday in Baltimore, they'll obviously have bigger concerns than draft-related skepticism from four years ago. But the way these two have evolved into superstars is a reminder that projecting a quarterback's career is an inexact science.

If there's a healthy admiration between Allen and Jackson, it's easy to see why.

“He’s in Buffalo and I’m over here in Baltimore, so there can’t be any hanging out and stuff like that,” Jackson said. "But when we see each other, we show respect amongst each other.”

The knock on Allen when he came into the NFL was his accuracy, and that was borne out to some degree his first two seasons in the league. Even then, he was a significant threat running the ball, and once he blossomed as a passer, the Bills took off. Allen is completing 71.2% of his throws this season, and he has passed for nine touchdowns and rushed for one. Only Jackson (10 passing, two rushing) has accounted for more TDs.

A Heisman Trophy winner at Louisville, Jackson faced questions about whether his style would translate to the NFL, complete with patronizing speculation about whether he should play receiver instead. The Ravens took Jackson, played him at quarterback and watched him win MVP in 2019. He currently has the best passer rating in the NFL (119.0) and is averaging 9.3 yards per carry. He was named AFC Offensive Player of the Month for September.

Fittingly, Allen and Jackson actually made their NFL debuts together when the Ravens opened the season with a 47-3 win over Buffalo in 2018. Both came on as backups in that blowout.

“It was different from college — a lot different,” Jackson said. "That’s what I remember.”

The stats suggest Jackson faces a tougher task than Allen in this game. Buffalo (2-1) has the league's top-ranked defense, and Baltimore's is ranked dead last. The Ravens are also last against the pass, and Buffalo's passing offense leads the NFL.

The Ravens (2-1) gave up a couple long touchdowns to Miami's Tyreek Hill two weeks ago, so this week will be a chance to show if they've made significant progress since then.

“Probably the biggest challenge is the fact that (Allen) does so many things so well,” Baltimore coach John Harbaugh said. “He’s a big, strong quarterback, he’s on time in rhythm. He can do that. He can hold the ball and get the ball downfield. He can throw it to every part of the field, obviously. He’s a tough tackle, even just moving in the pocket, then throwing, then getting out and running.”

Bills cornerback Taron Johnson had a 101-yard interception return for a touchdown against Jackson and the Ravens when the teams last met. Buffalo beat Baltimore 17-3 in an AFC divisional round playoff game on Jan. 16, 2021.

“Yeah, it brought back memories,” he said of facing the Ravens. “But I know it’s a new year. ... None of that stuff really matters right now.”

It did then in vaulting the Bills to their first AFC championship game appearance since the 1993 season.

Though safety Micah Hyde’s season is over because of a neck injury, there’s the possibility he could be used in a coaching role after helping out on the sideline in Buffalo's 21-19 loss at Miami on Sunday, a day after being placed on injured reserve.

Coach Sean McDermott didn’t rule out the possibility on Wednesday.

“I’ll give him a whistle,” McDermott said. “I joked with him about that a couple of days ago. He’d make a very good coach if he’d ever want to embrace that role. We’ll see.”

This is Allen's first game at Baltimore since that debut in 2018. That was a rainy game, and this weekend's could be too if the remnants of Hurricane Ian make it to Charm City.

One thing that's changed for Baltimore since Jackson's MVP season is that he's getting a lot less help in the running game. Jackson is responsible for over half of the Ravens' yards rushing in 2022, although running back Justice Hill showed some potential in last weekend's win over New England. Also, J.K. Dobbins could be in a position to contribute more after making his first appearance since missing all of last season with a knee injury.