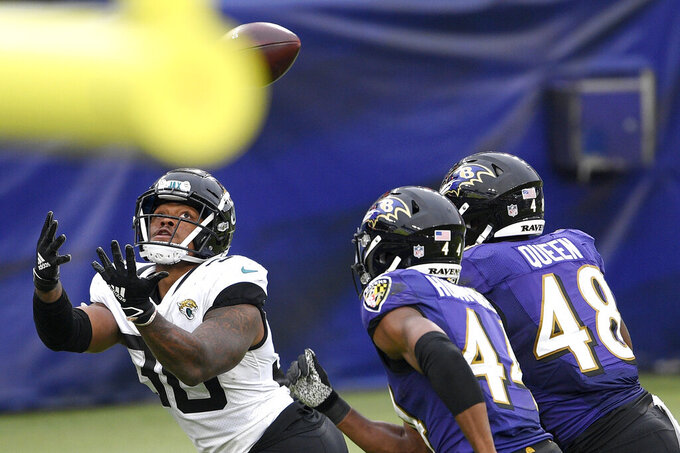 Jacksonville Jaguars running back James Robinson, left, watches the ball before making a touchdown catch on a pass from quarterback Gardner Minshew II (not shown) as Baltimore Ravens cornerback Marlon Humphrey (44) and linebacker Patrick Queen (48) defend during the second half of an NFL football game, Sunday, Dec. 20, 2020, in Baltimore. (AP Photo/Nick Wass)

Mike Glennon will make his fourth start of the season when the skidding Jacksonville Jaguars host playoff-hopeful Chicago on Sunday.

Coach Doug Marrone made the announcement Saturday following the team's final practice of the week, choosing Glennon over Gardner Minshew.

The Jaguars (1-13) also ruled out rookie running back James Robinson, who missed practice all week because of a left ankle injury. Robinson has been the team's biggest bright spot during its 13-game losing streak. Dare Ogunbowale and Devine Ozigbo are expected to get the bulk of the carries against the Bears (7-7).

Robinson is 35 yards shy of breaking the NFL rushing record by an undrafted rookie. He will try for the mark in the season finale at Indianapolis. There's no telling whom the quarterback will be in that one.

Marrone opened up the job following Minshew's five-sack performance in a blowout at Baltimore last week. Minshew took a safety, lost a fumble and had an interception returned for a touchdown that was overturned because of a late-hit penalty on the quarterback. He also missed several open receivers deep.

Glennon started the three previous weeks, a run that ended following his fourth turnover in six quarters. Glennon threw for 600 yards, with three touchdowns and three interceptions, in three games.

Glennon gets the nod against the team that paid him $16 million in 2017. Glennon started four games for Chicago before giving way to then-rookie Mitchell Trubisky.

The former teammates will now go head to head for the first time, both starting in Week 16 after getting benched earlier this season.

“There’s not a whole lot of guys left that I played with, but there's a handful," Glennon said this week. "I think anytime you’re going against your former team, there’s always some added excitement. I think that’s kind of natural to see and we’ll see what happens though.”