Jaguars could be without 3 defensive starters at Texans 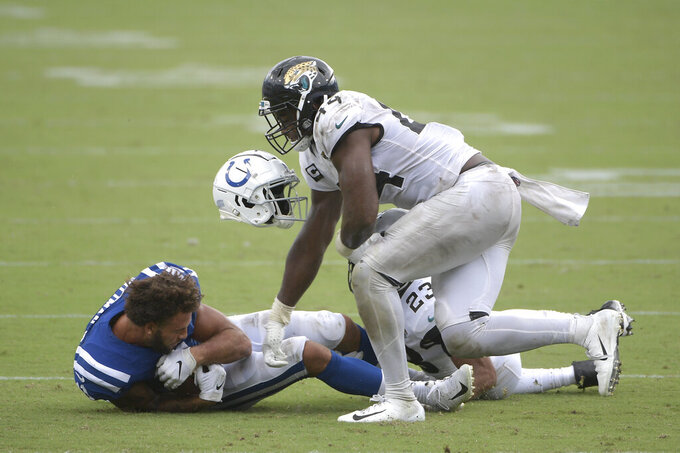 Indianapolis Colts wide receiver Michael Pittman loses his helmet after he was tackled by Jacksonville Jaguars middle linebacker Myles Jack and cornerback C.J. Henderson, back, during the second half of an NFL football game, Sunday, Sept. 13, 2020, in Jacksonville, Fla. (AP Photo/Phelan M. Ebenhack)

JACKSONVILLE, Fla. (AP) — The Jacksonville Jaguars could be without three defensive starters at Houston on Sunday.

Losing Allen would add to the team's pass rush woes. Jacksonville (1-3) has four sacks, and Allen has half of those while getting the most consistent pressure of anyone on the defense.

Jack leads the Jaguars with 37 tackles, and Henderson leads the team with four pass breakups.

Jacksonville's secondary already was thin after nickel cornerback D.J. Hayden (hamstring) was placed on injured reserve earlier this week. Without Hayden, the team was expected to have rookie Chris Claybrooks or newcomer Sidney Jones on the field more at Houston. If Henderson can't play, Claybrooks and Jones would both see significant action.

The Jaguars also will have their fourth placekicker in as many games. Stephen Hauschka will make his Jaguars debut after missing last week's game with a sore knee.

Josh Lambo (hip) was placed on injured reserve after Week 2. Rookie Brandon Wright pulled a hamstring in his NFL debut in Week 3, prompting Hauschka's signing. Hauschka was unable to go last week, forcing the team to call up Aldrick Rosas from the practice squad.

“I think what we've seen these past couple weeks is unprecedented; I've never seen that before," Marrone said. “It's almost like every day you're wondering who's going to be out there.”