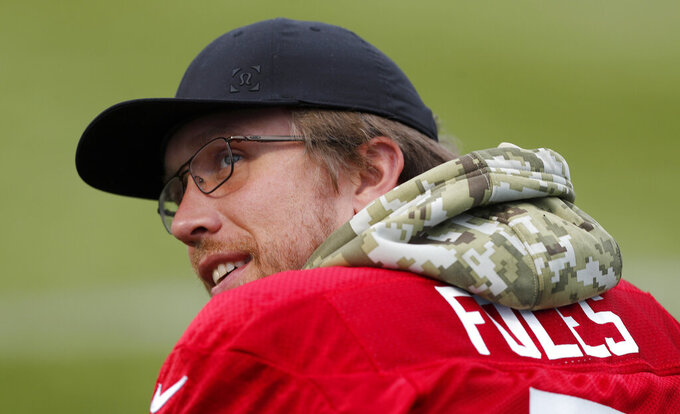 JACKSONVILLE, Fla. (AP) — Jacksonville Jaguars quarterback Nick Foles was able to return to practice in less than two months because he completely broke his left collarbone.

Foles said Wednesday he actually benefited from the severity of the injury, which happened on Jacksonville's second possession of the season opener.

"What's amazing with medicine (is) you get a hairline fracture, where you don't need surgery, it can take longer," Foles said. "You snap it, you need surgery and put a plate in there, it can actually heal quicker. So snapping it actually helped it. Little more painful, but I get to buzz every time I go through the airport now.

"I get to get stopped and checked. I get to meet more people. It's great."

It was no surprise that Foles would find the positive in his situation. He approached his absence as a learning opportunity, a chance to study the offense from a different perspective and really see what his new teammates do best.

"If you sit there and wait and wait until you play, you're probably not going to learn anything," he said. "The big thing was watching our offense ... seeing the ins and outs and going through the game plans, studying the film, I was able to learn and see different things."

Foles broke his clavicle against Kansas City on Sept. 8. The Jaguars (4-5) split their next eight games with rookie Gardner Minshew filling in for Foles.

Minshew was better than most expected, especially considering he was a sixth-round draft pick and the 10th quarterback selected in the 2019 draft.

But coach Doug Marrone wasted little time switching back to Foles, who returned to practice last month after being medically cleared to play.

"I'm disappointed a little bit, obviously," Minshew said. "Because everybody wants to be that guy in the huddle. But if you told me at the beginning of the year that I'd get to play half the season and learn, I'd say I'd take that deal 100%.

"I got a lot of good experience and mostly get to learn from one of the best dudes in the business."

Jacksonville remains in the hunt in the AFC South, but probably can't afford another division loss. The Jags play at AFC South foe Indianapolis (5-4) on Sunday, essentially a must-win game.

"I try to address it to the team as, 'You have to avoid all the stuff on the outside because this league is crazy, and you never know what's going to happen,'" Marrone said.

"You only have 16 opportunities. You go in there and give everything you have for each one. Our focus is on ourselves and playing well and performing well. I never really talked about must-win (games) until you get to the elimination rounds in the playoffs."

But all eyes will be on Foles, who signed a four-year, $88 million contract in free agency. He threw a 35-yard touchdown pass to DJ Chark on his last play, which ended with Kansas City defensive lineman Chris Jones landing on him and injuring his shoulder.

The Jaguars are counting on Foles to improve their red-zone efficiency. They rank 30th in the NFL in that category, having scored just 10 touchdowns in 29 trips inside the opponents’ 20-yard line.

"I think his experience down there and the things that he can do, hopefully that will be able to give us a bump there," Marrone said. "But I don't think it's going to just be one player. Obviously, the quarterback's an important part of it, but I think everyone else has to increase their play down in there also."

The 30-year-old Foles went 4-1 in the postseason and 6-2 in the regular season in place of Carson Wentz in Philadelphia the past two seasons. He earned 2018 Super Bowl MVP honors, making himself the league's premier quarterback commodity.

He's 0-1 with Jacksonville, a record that needs to improve for the Jags to make the postseason. He also still has come catching up to do.

"At this point, the cultures have been crafted," Foles said. "That's the biggest challenge of stepping back in there and just playing football when it's been a while. But I look forward to the challenge because of the guys I get to step into the huddle with."