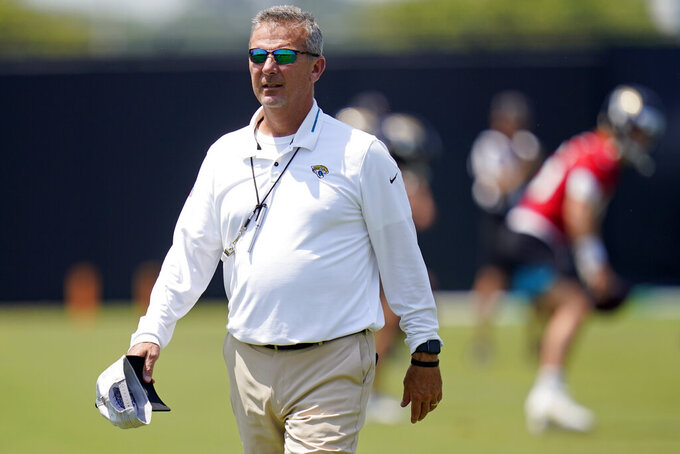 “If it’s not the very best, it’s a simple question of why not?" Meyer said. “Let’s make it the best.”

Khan agreed and took a major step toward fulfilling those promises Thursday when the Jaguars unveiled plans to develop downtown Jacksonville. The proposal includes Khan funding half of a $120 million performance center that's essentially a stand-alone football facility.

The first of two phases would break ground by the end of the year and take four years to complete at an estimated cost of $441 million. The proposal still needs approval from a review board and city council.

“Shad is making a big bet on our future,” Jaguars President Mark Lamping said. “So, this is a big plan. Working together, we can make this happen.”

The first phase includes a Four Seasons Hotel and Residences that Khan would own near TIAA Bank Field, a football facility built adjacent to the stadium, a six-floor office building that will house retailers and become the future home of the team’s business operations, and renovations to a city-owned marina that will give life to the neighboring shipyards.

The ambitious project also calls for the Jaguars to donate $4 million over 20 years to help maintain Metropolitan Park near the stadium.

The Jaguars expect the venture to be a catalyst for downtown growth that could draw more people to the area for work and entertainment.

“My goal is for downtown Jacksonville to be the envy of cities in the U.S. and elsewhere, and amaze ourselves in the process," Khan said. “We can reach that goal and, in fact, we must.”

Khan has spent nearly a decade working to improve Jacksonville and its aging stadium. He funded locker, weight and training room overhauls as well as sharing costs to install supersized scoreboards and build an indoor practice field and adjoining amphitheater. He also led the push to get stadium club sections revitalized.

He eventually wants to deliver a “stadium of the future” in Jacksonville, which likely means a $500 million or more makeover that’s likely to include covered seating around the entire venue. He believes an upgrade is needed to increase local revenue and eventually eliminate the need to play annually in London.

“We need to be the catalyst, we need to be the spark to have a change,” Khan said. “It's to make a difference for Jacksonville but also really what do we have to do win games at the same time.”

The Jags will sign a long-term lease with the performance center, which is scheduled to open in summer 2023, and take full responsibility for operational costs.

Jacksonville’s current indoor practice field, completed in 2017, will be turned over to the city’s parks and recreation department for more than 300 days of programming.