Jaguars to play 1 home game annually at Wembley through '24 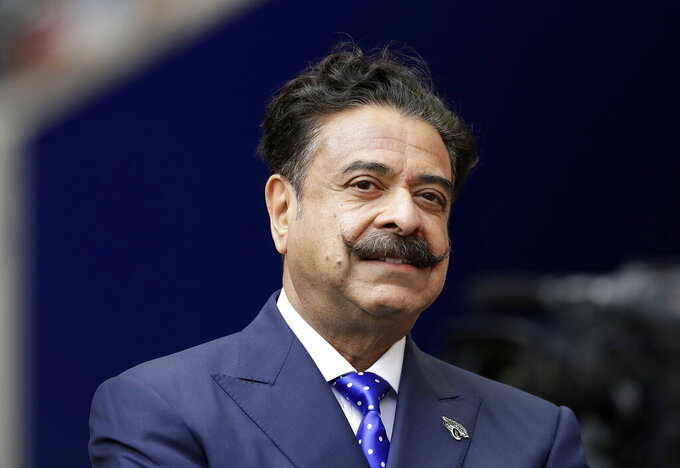 FILE - In this Sept. 24, 2017, photo, Jacksonville Jaguars owner Shahid Khan stands before an NFL football game against between the Jaguars and the Baltimore Ravens at Wembley Stadium in London. The Black News Channel shut down on Friday, March 25, 2022, after failing to meet its payroll and losing the support of its chief investor, Kahn. The network, founded by former GOP congressman J.C. Watts, relaunched last year following an investment by Kahn, hiring 250 Black journalists and production personnel. (AP Photo/Matt Dunham, File)

With other NFL teams encroaching on the United Kingdom, the Jacksonville Jaguars want to establish a stronghold on the overseas market.

The Jaguars received formal approval Monday at the NFL owners meetings in Palm Beach, Florida, to move forward with a three-year contract to play annually at Wembley Stadium. The deal gives the small-market franchise exclusivity at one of London's most iconic sporting venues.

Jacksonville will have full control of the home game for the first time, a change that should lead to increased local revenue for a team playing more than 4,000 miles (6,437 kilometers) from its base. The Jaguars will be in charge of ticketing, merchandise sales and game-day management.

“It's important that we protect our position, and we think this has done that by having certainty that we’ll be the only team that’s playing at Wembley," team president Mark Lamping told The Associated Press on Tuesday. “If we execute properly, not only will it give us more control, it will allow us to have the game presentation be much more similar to what our fans have come to see in Jacksonville and it should become more profitable."

Jacksonville played a “home game” at Wembley every year between 2013 and 2019 and would have played there again in 2020 had COVID-19 not halted international travel. The league and the Jaguars returned to London last year by playing one of two NFL games at Tottenham Hotspur Stadium.

But the Jags prefer to be at 86,000-seat Wembley, which produces greater ticket revenue and is closer to Jaguars owner Shad Khan's soccer team, Fulham FC. They also believe being at Wembley every year could separate them from the rest of the league at a time when competition is more fierce for international revenue.

“For the past 10 years, it’s been only the Jaguars,” Lamping said. "Other teams that have seen how things have gone for us in the U.K. and how it’s helped grow the game. Now you have big-market teams that are coming into London, not necessarily with the same commitment of games that we’re making.”

The 8,500-mile round trip is significant for Jacksonville’s financial stability. The Jaguars credit about 11% of their local revenue to playing abroad.

Jacksonville’s ticket, television, sponsorship and stadium revenue streams are smaller than NFL teams in larger markets. Earning money in London helps offset some of the disparity, and the game remains a critical part of the team’s long-term plan.

“It’s hard to believe it will have been three years since our last game at Wembley,” Jaguars owner Shad Khan said in a statement. “But that changes this autumn, and we look forward to coming back to our London home.

“We have built a great fan base already in the U.K., and I look forward to that increasing as we reaffirm our commitment to the playing of one home game per season in the U.K. for the long term, as was always the ambition when we first played in 2013.”