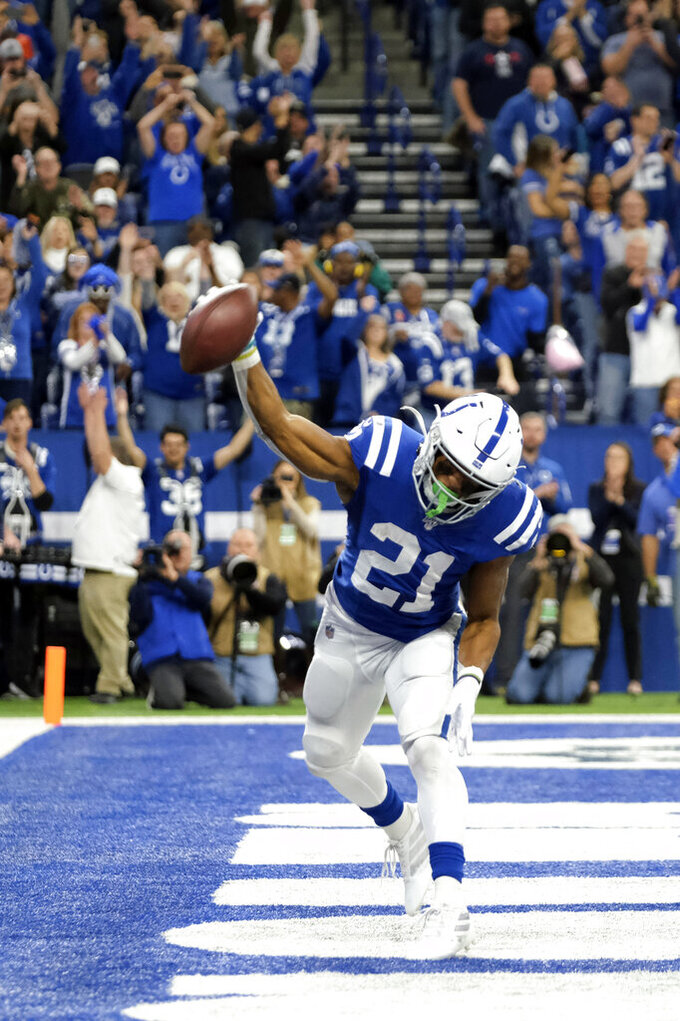 Indianapolis Colts' Nyheim Hines (21) celebrates a touchdown during the second half of an NFL football game against the Jacksonville Jaguars, Sunday, Nov. 17, 2019, in Indianapolis. (AP Photo/AJ Mast)

The Indianapolis Colts kept gashing the Jags with long runs and sustained drives by opening hole after hole Sunday. Once again, the result was predictable — a 33-13 loss, Jacksonville’s fourth in six games.

It’s a strange twist for what has typically been one of the league’s stingiest defenses.

But the Jaguars (4-6) haven’t lived up to that reputation lately.

After giving up 216 yards rushing in a 26-3 loss to Houston in London two weeks ago, Marrone had two weeks to clean up the mistakes before facing a second straight division rival.

The numbers were even worse.

Marlon Mack ran 14 times for 109 yards and one touchdown before leaving with a hand injury in the third quarter. His per-carry average: 7.8 yards.

Jonathan Williams, Mack’s replacement, was even better. He carried 13 times for a career high 116 yards, a clip of 8.9 yards per carry, and caught one pass for 31 yards on third-and-19. In his previous 3½ seasons, Williams had a total of 32 carries for 95 yards and two receptions for one yard and he might have had better numbers totals if he hadn’t given himself up twice after long, fourth-quarter runs so he could keep the clock moving.

It was the first time Indy had two 100-yard rushers in the same game since Oct. 6, 1985, and only the third time in franchise history.

“We didn’t tackle well,” defensive end Calais Campbell said. “We’ve got to wear it. We played ugly. This is what we have done every game. But we will go back and watch the tape and figure out what we can do better — figure out how to perform better because today wasn’t us.”

Right now, this is what the Jags look like on paper.

They’ve let three of their last six opponents to run for more than 200 yards, a span that began with Carolina churning out 285 in Week 5.

They’ve allowed 480 yards rushing in the past two games, 134.6 yards per week in 10 games and will likely continue sliding down the NFL rankings after starting the day No. 22 against the run.

While they did manage to prevent 330-pound All-Pro left guard Quenton Nelson from scoring on a 1-yard run, that minor victory only came after Nelson celebrated the initial call with his teammates gathering around and lifting him up before a replay review nullified the score.

But the worst part of Sunday’s performance might be the knowledge all of this came against an AFC South contender they had shut out twice in the previous four matchups — and on a day the Jags could have changed the complexion of the division race with starting quarterback Nick Foles back on the field.

Instead, they headed home with more questions than answers and a game tape that will reflect the numbers on the stat sheet.